Ah, Opening Day of the 2018 Major League Baseball regular season has arrived! With all 30 franchises playing on what is the earliest occasion an MLB season has begun, today will give fans a chance to chart their clubs’ chances of going from spring hopefuls to autumn heroes. Owners will likewise find themselves scrutinized—and not solely for the personnel they put on the field. While watching the athletes do well proves compelling enough to many fans to secure their attendance, others enjoy an incentive or two to venture to a ballpark. Needing to be as schooled in fathoming preferences as they are skilled in evaluating talent pools, bigwigs have called on pop culture promos to make their coffers larger, with data deeming their efforts successful.

Baseball fans are impressionable people, and SportsBusiness Journal’s November 2017 analysis showed that along with quality on-field product, they enjoy stadium-situated nods to other pursuits, with promos serving as a chief means to encourage them to preserve baseball as America’s pastime. The publication’s 12th treatment of said giveaways and special events is an excellent look at contemporary strategies to add more luster to a sport that has come to be classified as “boring” to many. The players certainly do not share that negative perception, but owners cannot focus solely on how well a team’s ace is dealing or how quickly a rookie sensation is adjusting to The Show. 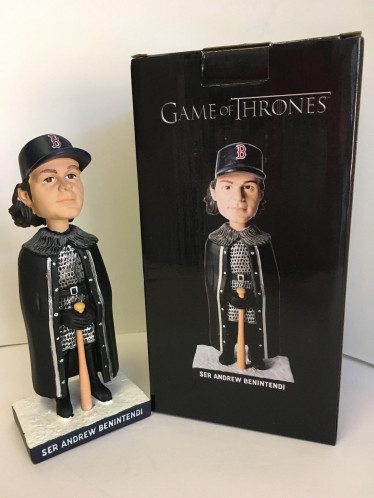 Yes, many fans live for the sport and can follow a team diligently, generously contributing to its bank account, but most of us enjoy catching an occasional game and going about our lives. When partaking, though, fans can use another bit of competition for their attention, with the Journal pointing out that co-branded promos, such as bobbleheads, and theme nights that pay homage to pop culture heavyweights fare very well.

Although I want the Phillies to succeed, I might head to a game with a promotion and not the game’s outcome top of mind. In that sense, MLB has hooked me, and I am not alone, as the Journal details similar tales of have-to-have-it fans proving that diamonds are forever.

One of these days, I will give “Game of Thrones” a shot, and if I get hooked, I will be like fans who last year helped 21 teams enjoy an average attendance bump of 10.4 percent thanks to their staging an eponymous tribute night. The detailed case studies within the Journal's study should make most fans proud of their clubs, especially the folks in Milwaukee, whose Brewers never stop crafting pop culture appreciation promotions, as the findings reveal that teams are looking to make trips to a game both a chance to see athletic skill and marketing talent.

“There’s a stature to those pop-culture brands,” Teddy Werner, Brewers vice president of marketing and business strategy, told SportsBusiness Journal. “Not only can you give away an exclusive item, like our limited-edition Jedi Keon bobblehead—but the activation throughout the ballpark enhances the experience for all the fans. More importantly, of the 25 different theme night packages we offered [in 2017], our analytics team determined that 25 percent of the tickets we sold were truly incremental, meaning these were fans that had never, or would likely not have ever, attended a game at Miller Park.”

With such behemoths as The Beatles, Marvel, “Peanuts” and “Star Wars” joining the hit HBO series as inspirational forces, franchises established a respectful list of giveaways last season and seem set to achieve similar renown this year, even if bobblehead promos, which for six years have led the way as enticers, are not as high as in years past.

Baseball’s regular season can be a bit of a blessing and a curse, as its duration can give teams time to gel yet can also make some followers lose interest, no matter how compelling division races are, as football season beckons. Never eager to let the calendar be a deterrent to their progress, owners are constantly consulting with behind-the-scenes helpers to offer interesting promos. While umpires are declaring, “Play ball,” they are wondering, “What’s next?”

With that in mind, we are curious. What is your favorite team’s most compelling promo idea this season? Will it lead you to attend a game? Also, which promos would you like for your preferred franchise(s) to offer?