Dave & Buster's Dropped a 40 Ft. Branded Banana on the Street to Show How Big Their TV Screens Are

Have you ever seen someone on social media ask for a “banana for scale?”

It sounds risqué, but it’s actually just a common way to determine how large something is in a photo. Everyone knows pretty much how big bananas tend to be, making them a pretty effective yardstick, so to speak.

“Banana for scale” has become a meme, too, since it is pretty goofy after all.

Dave & Buster's, trying to make sure that we all understand just how huge their "Wow Wall" 40-foot TV screens are, took “banana for scale” to new levels by placing an equally large inflatable banana on Hollywood Boulevard.

The banana took the stage on the well-traveled street last week, but there’s also a virtual component for those outside of Los Angeles.

The display was a collaboration between Dave & Buster's and Mother In New York’s DING DING DING creative platform. Mother In New York created a special D&B Instagram filter, where users can drop the giant banana into whatever’s in their camera’s field of vision. 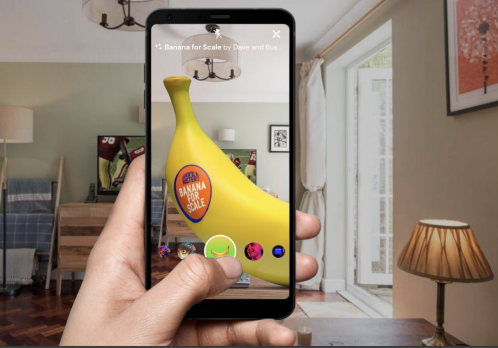 It sort of skews the whole measurement system we’ve all grown accustomed to, since we can now use a 40-foot banana for scale. But, it’s good brand visibility for Dave & Buster's.

Intimidating muscular cows look puny compared to the #bigbananaforscale. We made this banana to show you how big our TVs are. 40 feet, to be exact. pic.twitter.com/2yBgvDN05e

It sure makes our own TVs look small, which is the point, isn’t it?