It’s always fun to see what souvenirs actors keep once their movie or TV show wraps. We used to watch shows like MTV’s “Cribs” to see what props, set pieces or costumes people held onto.

It turns out, David Hasselhoff has quite a collection of merchandise and memorabilia from all of the things he's done, and is auctioning off 150 pieces of his own collection to raise money for charity.

You’ve got some things like license plates, toys and drinkware, and those are all priced relatively cheap. There are some things that are autographed, which run a little higher than they would as ordinary posters, bags or shirts. 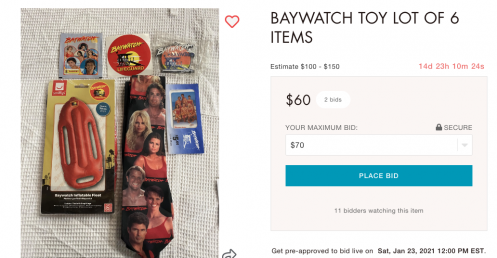 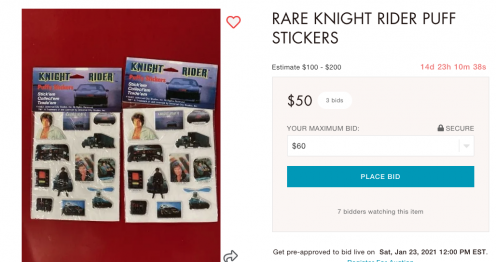 And then you have KITT. Yes, the Hoff not only kept, but is now auctioning his personal KITT car from “Knight Rider.” With 12 bids in so far, it costs $975,000.

It’s cool to see the Hoff doing something charitable. We wish we could do something like that whenever we clean out our closets. It’s also wildly impressive to see just how much he kept after such a long and eventful career in TV, movies and music. The dude has done everything, and apparently kept everything, too.

And the wildest thing to think about here is that someone is actually going to get KITT. They’re going to get the car. It’s going to be theirs. The only question is will it be someone cool who will actually drive it around town to Starbucks, bringing joy to everyone they pass? Or will it be some boring billionaire who keeps it in a garage and cleans it with a diaper like Cameron’s dad cleaned his Ferrari in “Ferris Bueller’s Day Off?”

You can check out the whole list of Hoff’s memorabilia, which will be available for another two weeks, here.