Democrats, Republicans and Merchandise at the DNC 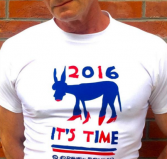 The Democratic National Convention (DNC) begins today in Philadelphia, and both supporters and protestors are showing their colors through merchandise. Some of the merchandise, which celebrates the Democratic Party and presidential candidate Hillary Clinton, is for sale through the convention's official stores. Those who arrived in Philadelphia and swing more to the right, however, came with their own treasure troves of anti-Clinton promotional products.

The New York Post rounded up a few products that Clinton's opposition handed out at the "RNC at the DNC" event—about a mile from the DNC's location in South Philadelphia.

The Republican promotional items included "Hillary Clinton's Baggage" tote bags, which featured a list of past and present scandals in her political career; a "Secret Server Wiper" microfiber cloth; a pair of loaded dice with the Clinton campaign's logo; and and "HRC Redaction Pen," which looks a lot like a Sharpie marker, and says, "Covering up since 92."

The most popular item, with 240 sold as of last week, has been the "It's Time" shirt, designed by artist Brett Bender; followed by a Duke & Winston design, with about 230 sales.