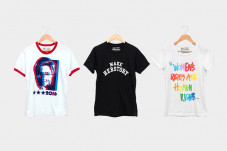 As the 2016 presidential election continues to rage on, more and more merchandise has been popping up. We've seen merchandise aimed at millennials, we've seen guys earning hundreds of thousands of dollars by selling campaign buttons, and we've seen a fair share of unlicensed merchandise as well. Now, some candidates have gotten outside help for campaign merchandise.

According to GQ, Hillary Clinton and Bernie Sanders have recruited famous designers and graphic artists, such as Shepard Fairey and Marc Jacobs, to design merchandise.

Clinton released three T-shirt designs from designers Marc Jacobs, Dao-Yi Chow and Maxwell Osborne, and Tory Burch. All of the T-shirts are available for $45.

Chow and Osborne's design features "Make Herstory" on the front with the No. 16 on the back, a reference to the athletic appeal of their brand, DKNY. Burch's design showcases the phrase "Women's rights are human rights" in a rainbow of color.

Fairey modeled the T-shirt design off of a piece he made for rock band Red Hot Chili Peppers' benefit show for Bernie Sanders.

On the other end of the political spectrum, Republican candidate Ted Cruz severed ties with the street artist Sabo, who designed Cruz's "Blacklisted" collection. According to the San Antonio Current, Cruz decided to end his relationship with Sabo after receiving criticism from talk show host Cenk Uygur of The Young Turks, shedding light on the artist's racist messages on social media.