Detroit Vs Everybody Brand Confronts Satirical Sports Blog Over T-shirt 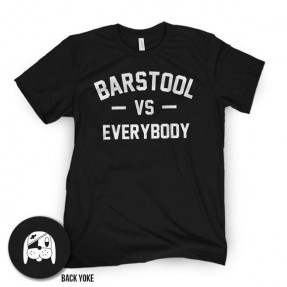 Detroit Vs Everybody's attorney sent a cease-and-desist letter to Barstool Sports over this T-shirt. (Image via crainsdetroit.com)

Certain cities have acquired hit-and-miss identities due to the combination of enthralling and appalling events that have come to comprise their histories. Philadelphia—Promo Marketing’s metropolitan base—definitely finds itself among those municipalities with mixed records of success and failure, with the latter element often so prominent that one would not need to look for too long to locate residents who hone an “Us against the world” mentality. Detroit would join the City of Brotherly Love and Sisterly Affection on any list of checkered destinations, with Tommey Walker holding that focusing on the positives of Michigan’s largest city will rebuild its image and foster “restored pride” among inhabitants. Thanks to his Detroit Vs Everybody brand, the entrepreneur is making good on his brainchild’s confrontational naming convention by going after Barstool Sports, a satirical blog whose frequent controversies led overseers to release a Barstool Vs Everybody T-shirt.

As “a self-professed commissioned artist, brand manager and creative problem solver,” the businessman has enjoyed a fruitful existence as the mastermind behind a collection that looks to cast its hometown as a take-no-nonsense-from-anyone expanse. Having registered his trademark for “wearable garments and clothing, namely, shirts” in late 2013, Walker has enlisted an entertainment, media and intellectual property lawyer to have Barstool pull the product since nobody granted the entity the freedom to use the “Vs Everybody” trademark.

“We will tell them not to use it, that they can’t use it anymore, unless they have permission, and in this case, permission wasn’t granted,” attorney Joe Bellanca told Crain’s Detroit Business, with a cease-and-desist letter going out to the likely legal foe on Tuesday.

The commerce tracker also noted it had sent an email to Barstool Sports that same day but did not mention if the New York City-based business had responded. This is an interesting period for the supposed trademark violator, which, on Monday, saw its eponymous Van Talk show dropped from ESPN2 after only one airing and for the company seeking the suppression of the in-question garment (which, interestingly, does not appear on any of the 11 pages of T-shirts on the Barstool Sports website’s store tab), as Walker expects to open more spaces next month.

As these are the early stages of a potential squabble, it will be interesting to see how Detroit Vs Everbody handles the matter, especially since it already is challenging Dope Era for issuing an “Everybody —Vs—Trump” shirt that Oakland Raiders running back Marshawn Lynch donned Oct.1. Trademark laws never cease to amaze many folks, so the Lynch matter might appeal to the public because the “Everybody” and “Vs” are not in the same order as on the Detroit-issued goods, and this could lead to the contention that the Dope Era product does not violate the law. The second incident could prove even more provocative because even though Walker has helped other regions “to get a Vs Everybody treatment,” Barstool Sports also called on the same em dashes on its shirt that the Detroit Vs Everbody brand placed on its most well-known top. To many observers, that detail might be enough proof to cause the Barstool folks to call it a night.