Did the Flyers Scrap Another Wristband Giveaway? 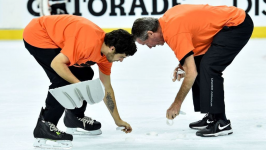 Yesterday, we reported on how Philadelphia Flyers fans vented their frustrations by throwing commemorative wristbands onto the ice. As a result, it looks like the Flyers organization learned from this, as wristbands won't be tonight's giveaway item. But they almost were.

Sports Illustrated reported that the Flyers had another wristband giveaway planned for tonight's game against the Washington Capitals, but scrapped the idea after Monday's fiasco.

Sometimes throwing things, like hats, stuffed animals for kids or octopi, on the ice can be fun during a hockey game. Throwing items that were meant to pay tribute to the team's late owner in a fit of rage is not one of them.