Did this Chinese Apparel Company Rip Off Under Armour? 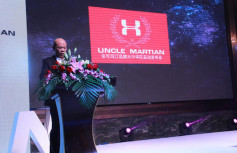 Under Armour is claiming that the logo of Chinese sportswear company Uncle Martian is too similar to Under Armour's. (Image via Complex)

The logo for Chinese sports apparel company Uncle Martian looks pretty familiar. It's a "U" stacked on top of an upside-down U—almost like Baltimore-based Under Armour's logo of the interlinked "UA."

"We're focusing on developing our own brand, and our brand has nothing to do with theirs at all," Zheng Maoxin, head of marketing for Uncle Martian's parent company, Fujian Tingfeilong Sports Goods Co. Ltd., said to The Wall Street Journal. "I wouldn't comment on those online rumors. Our brand has been authorized by the Administration for Industry and Commerce, so how does that not count?"

Erick Haskell, managing director of Under Armour Greater China, told The Wall Street Journal in a statement that the company will pursue legal action.

"Uncle Martian's uses of Under Armour's famous logo, name and other intellectual property are a serious concern and blatant infringement," Haskell told The Wall Street Journal. "Under Armour will vigorously pursue all business and legal courses of action."

The companies' respective Chinese names aren't that far off, either. Uncle Martian's Chinese name, Ankemading, is strikingly similar to Under Armour's—Andema.

The Wall Street Journal also reported that one social media critic noticed that a "Certificate of Incorporation" on Uncle Martian's website actually belongs to Under Armour.