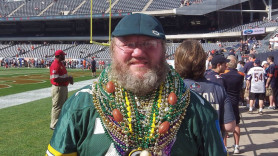 Russell Beckman was told he could not wear his Packers gear on the field at Soldier Field. (Image via Deadspin)

In our fair city of Philadelphia, we are, sadly, often quite unfair to those who dare to don opposing teams’ gear at sporting events. In our defense, though, I will say that our athletic organizations never seek to keep supporters of various allegiances from expressing their devotion. Such, it seems, is not the case in Chicago, as Wisconsin inhabitant Russell Beckman, who holds season tickets to the Bears, is suing the football franchise for failing to permit him to wear Green Bay Packers gear during a December pregame event.

When learning of this matter, I immediately thought of “The Letter,” the Season 3 “Seinfeld” episode where Elaine, while sitting in the owner’s box at Yankee Stadium, ends up removed from the venue for refusing to take off her Baltimore Orioles cap. That incident received comedic resolution, but the grip by Beckman will require legal intervention, as the 56-year-old filed a federal lawsuit Friday, contending that the powers-that-be suppressed his right to free speech. The litigious reaction stems from a decision by the high school social studies teacher to show his typical loyalty to his home state’s gridiron group by adorning himself in its cherished green and white colors ahead of the clubs’ Dec. 18 duel.

The snag occurred because Beckman had known prior to the tilt, a 30-27 Packers victory that evened the NFC North rivalry at 94-94-6, that he and the other participants could sport only Bears garb in enjoying the season-ticket-holder experience. He contends that the Bears, his second-favorite childhood squad, had not given him any problem the other two times when he chose to mingle among Bears fans in his Packers apparel. So fond of making his pride apparent that he even dyes his beard green, Beckman found himself flummoxed when, he argues, the Bears, only six days before the late autumn clash, sent an email of rules that included the admonition "NO OPPOSING TEAM GEAR WILL BE ALLOWED." Defying the warning, he chose to be a Cheesehead in earnest and met with rejection.

“It’s the biggest rivalry,” the educator, who purchases season tickets from the Bears mainly for the opportunity to catch the Packers on enemy turf, said of a match-up that originated in 1921. “The excitement is Bears and Packers fans together, representing their teams, I could have worn something nondescript, but I’m there for the Packers-Bears game. I feel like the Bears are diminishing that.”

The fan experience is open to backers who tally a set number of points based on the number of seats they hold and their tenure as holders. Granting the chosen few time on the sideline during warm-ups, it has proven a popular opportunity for the Illinois franchise’s throng to be thrilled before their heroes do battle.

For Beckman, whose lawsuit states that commissioner Roger Goodell has not responded to his certified letter, the day in question cast the Bears’ brass, who have not commented on the matter, as grinches.

“It’s something I paid for,” the plaintiff, who is seeking to recoup legal fees and to have the Bears grant the selected crowd to wear whatever it wants, said. “I’m not on a noble crusade. I’m not the center of attention [from] where I stand.”

Interestingly, Beckman last month learned he could purchase another fan experience, so, naturally, he picked the Nov. 12 game that will see the Bears look to be hostile hosts at Soldier Field.

“It bothers me,” he said of the defendant’s Bears-only policy for the pre-game gatherings, “and I’m taking them to court.”