Last summer, Nintendo, long a purveyor of domestic delight, reminded children of the joys of the great outdoors through Pokemon Go. The phenomenon continues to captivate, despite a recent setback, but Disney is desiring to be the darling of augmented reality devotees through some indoor fun. Come Sept. 1, it will unite “Star Wars” fans with 15 smartphone-accessed characters through Force Friday II, the merchandise launch experience pertaining to the release of “The Last Jedi.”

Around 20,000 stores covering roughly 30 countries will inspire additional anticipation for the film franchise’s eighth installment through the aforementioned date and its weekend successors. By downloading the “Star Wars” application on their mobile devices, giddy followers of the galactic saga will become “Find the Force” participants and will have opportunities to video and photograph the creations, a few of whom might also speak. The retail sites will open at 12:01 a.m. Eastern Standard Time, so those admirers looking to burn the midnight oil will definitely have plenty of fuel with which to work considering that the occasion will also be a collector’s dream come true. The establishments will hawk merchandise from “The Last Jedi,” the follow-up to 2015’s “The Force Awakens,” which inspired the initial Force Friday, so expect some amazing finds, along with the chance to fraternize, at least technologically, with the characters. 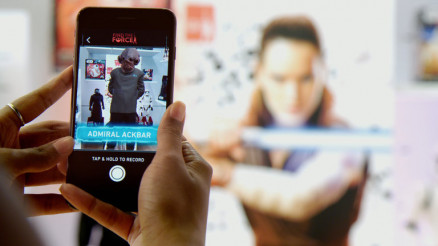 Admiral Ackbar and Rey will be among the 15 characters with whom fans can interact through the augmented reality option. (Image via Disney)

“We are excited that augmented reality will allow fans to experience the universe in a whole new way,” Kathleen Kennedy, the president of the Disney-controlled Lucasfilm, which is responsible for the cinematic series that originated in 1977, said.

Disney will certainly not need to rely on Jedi mind tricks to peddle the products, as the “Star Wars” franchise brought in $1.5 billion in sales over 2015 and 2016. From a business sense, one really must credit the overseers for the timing of this event, as Labor Day Weekend will now have an added bit of levity for children (oh, who are we kidding? Adults are going to go gaga for this, too!) ahead of their return to school. Some commercial locations will participate in the augmented reality game until the December 15 release of “The Last Jedi,” meaning a few fortunate fans will likely have opportunities to interact with all 15 characters, including two new figures, by late fall.

From a consumer’s perspective, the three-day extravaganza promises to be an unforgettable way not only to stimulate the retail economy (if that is truly on anyone’s mind in this online age) but also to intensify the countdown to the film’s release. Speaking of that glorious late autumn day, those who use specific hashtags when sharing their in-store experiences on Instagram and Twitter will become sweepstakes participants, with the grand prize being the enviable opportunity to view “The Last Jedi” premiere.

For the first six films, beginning with “A New Hope” and concluding with “Revenge of the Sith,” audiences needed to wait three years between theater trips, so the shortened wait between “The Force Awakens” and “The Last Jedi” is definitely a boon, as is the augmented reality component, which will probably go a long way toward increasing enthusiasm and, because who is not in this business to make a buck, making a few folks rich(er).