Taking things found in video games and movies and turning them into merchandise is not a new phenomenon. In fact, it's about the oldest trick in the book when it comes to marketing for these media platforms. But Disney is doing something a little different with Star Wars merch for a tie-in with the new "Jedi: Fallen Order" video game.

Part of the game involves designing your character's lightsaber. It's every wannabe-Jedi's dream come true. In the real world, those fans can do the same at the Star Wars: Galaxy's Edge theme park, which includes (among other merchandise) a build-your-own lightsaber shop.

Now, here's where those two meet: Let's say you took a trip to Disney and checked out Galaxy's Edge. While you were there, you went into Savi's Workshop to create your own lightsaber. Then, you went home and booted up "Jedi: Fallen Order." In the game, you can construct an almost identical replica of your lightsaber from the park, down to the most perfect detail.

I know I’m taking my sweet time with this game but being able to build my Lightsaber from Savi’s workshop makes me all kinds of giddy. I wonder if they’ll sell a dual blade attachment? pic.twitter.com/mI1KmtMCnr

That's not a coincidence. It's not even the only example of Disney blurring the lines between toy from the IP and IP from the toy.

“'Jedi: Fallen Order' was the first of other place where you see those stories," Brad Schoenberg, head of global merchandise franchise work for Star Wars, told Polygon. "It’s not just Savi’s. It’s everything in the land. We have product that showed up in episode one of 'The Mandalorian.' I just sent another round of product to The Mandalorian for season 2. So you’ll continue to see everything embedded in this broader storytelling.” 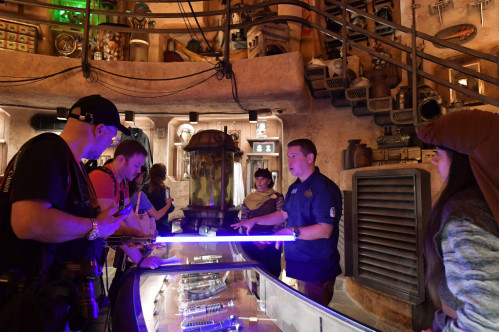 Fans can perfectly match the lightsaber they made at the Galaxy's Edge theme park with their in-game lightsaber in "Jedi: Fallen Order." | Credit: Getty Images by Amy Sussman

We know the stories of how some shows were created solely with the intent of selling toys. The toys came first, then came "Power Rangers" or "Transformers," for example. But "Star Wars," despite the early commercialism satire, was an organic creation that just happened to garner an enormous following. With that, came the merchandising.

Creating the merchandise first, and then the movie/video game/TV show, is a novel idea in 2019, though.

“Working with Doug Chiang [vice president and creative director of Star Wars] on the design of the lightsaber pieces for actual Savi’s, we designed them a lot in-house with the parks merchandise designers and teams," Schoenberg said. "Then we’d go meet with Doug and team. We’d all make changes together with Lucasfilm story and bring them back. Finally when we got to the last set of pieces, Doug said we’re going to need all the 3-D copies because we plan to use these in the video game. You’ll see them in content coming up and see them kind of take on new life.”

Disney is in a unique position where it owns so many IPs and operates in so many kinds of media that it can pull this off. Not everyone who owns a major intellectual property also has a theme park with the most immersive merchandising experience on planet Earth. Not every video game company can get the rights to an international cinematic lifestyle.

But Disney can. And Disney will keep pushing the limits on what we can and can't do with merchandising and advertising.