If there's one thing that Disney and Pixar have proven over time, it's that their movies are A. delightful, and B. marketable as heck.

Its new promotional collaboration for the upcoming Coco (which looks absolutely delightful) hits all the right buttons in terms of a memorable and effective promotional campaign. Through partnering with Córdoba and Guitar Center, Disney-Pixar created a special line of three nylon-string guitars modeled after the guitar the movie's main character, Miguel, and his idol Ernesto used int he movie.

Inside the Magic spoke with Harley Jessup, production designer on the movie, about the inspiration for the promotion. He described how the production and animation included paying careful attention to how the characters placed their fingers on the animated fretboards, painstakingly ensuring that each finger placement was correct.

"First we see Ernesto playing his skull guitar in a spectacular flashback, then we see close-ups of Miguel playing his homemade guitar that he's decorated to look like the skull guitar," Jessup said. "Ernesto's guitar is the most important instrument in the film. For its design we were inspired by the inlaid designs of 19th century Mexican guitars we saw in the collection of the Metropolitan Museum of N.Y."

After reaching out to multiple guitar companies, Disney-Pixar settled on Córdoba, which it said was "inspired by Miguel and his story" and related to the musicians in the film. 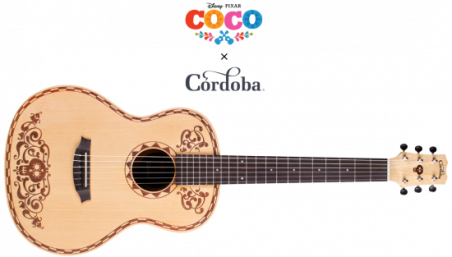 Disney-Pixar teamed up with Córdoba to create replica guitars of the ones in its new movie 'Coco.' | Credit: Inside The Magic

"We tried to help with the visual details, but the quality of the instrument was all from Córdoba," Jessup said. "When we created the guitar in the film, our focus was on making the skull guitar visually distinctive and iconic to support the story. … We sent detailed pictures of the skull guitar to Córdoba, and last summer we got to visit the L.A. studio of master luthier German Vazquez Rubio to see the first guitar in progress. The replica version of Ernesto's guitar is a masterpiece of craftsmanship."

This is a fascinating and effective promotional campaign on a few levels: First, this is something that's valuable on its own. A solid guitar is a solid guitar, no matter how much branding is on it. It's something that musicians and collectors will cherish (and use) for a long time. Further, it adds a deep connection to what they're promoting—in this case, a film—by allowing fans to literally do what the characters are doing on the screen with an item that looks identical. (Based on their playing ability, it might sound identical, too.)

Once again, Disney is putting on a clinic in marketing ability. And we're listening.