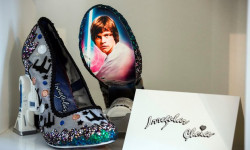 Disney has planned a new line of licensed goods aimed specifically at older fans. (Image via The Guardian)

Though many of its feature films and television shows are geared toward children, Disney has a strong following of adults as well. To capitalize on this audience, Disney has created new lines of clothing and home goods aimed at older Disney fans.

According to The Guardian, Disney has granted character licenses for use on toys, clothing, food, drinkware and more, and has drawn from early sketches from the 1930s to recent blockbusters, like "Frozen."

"We did a lot of consumer research and discovered there was a huge demand for adult product from Disney," Francesca Gianesin, head of fashion and lifestyle for the Europe, Middle East and Asia region for Disney Consumer Products, told The Guardian. "When we see a movie, the first thing we think is will there be an emotional connection? What is it men and women would like to feel by wearing pieces of that movie?"

Gianesin also has organized a Disney Living team, which aims to create licensed home goods, like cushions, towels and mugs.

By creating items for adults, Disney can capitalize on the nostalgia factor that tugs at adults' heartstrings when they see the films and shows they grew up watching.

"There is a constant need for newness and storytelling in a fashion market that is quite stagnant at the moment," Lorna Hall, head of market intelligence for WGSN, told The Guardian. "Disney is an iconic brand and part of the story of how we have grown up. There are lots of stories for brands to play with."

Disney has a lot of nostalgia to play with, especially now that the "Star Wars" franchise—one that, with its original 1977 release, now spans generations—is in the Disney universe following the acquisition of Lucasfilm, as well as Disney's ownership of Pixar.