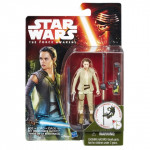 After "Star Wars" fans voiced their opinions on the lack of merchandise including Rey—one of the new movie's lead characters played by Daisy Ridley—Disney announced that it has released new merchandise, much of which includes the new female character.

Even "Star Wars: The Force Awakens" director J.J. Abrams said he was confused by the lack of Rey merchandise. According to Time, Abrams said it "seems preposterous and wrong that the main character of the movie is not well-represented."

Elissa Margolis, senior vice president for the Disney Store said in a press release that the company is happy to include Rey in its new wave of merchandise.

"Rey is a true break-out hero in the movie and is proving a huge hit with our guests," she said. "Demand for Rey merchandise was strong even before the movie released, with products selling as quickly as we could restock shelves, and it's only growing with the success of the film."

Most recently, fans were upset that Rey was left out as a playable character in the "Star Wars" Monopoly board game. Hasbro officials told Entertainment Weekly that the company would add the character to the Monopoly game available later this year.