Part of the appeal of Disney’s Star Wars: Galaxy’s Edge theme park was the fact that all of the merchandise was exclusive. You couldn’t get it unless you ventured a long time ago in a galaxy far, far away. (OK, it’s just in Florida, but still.) 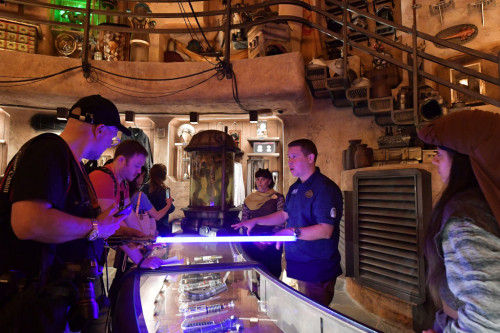 Fans can perfectly match the lightsaber they made at the Galaxy's Edge theme park with their in-game lightsaber in "Jedi: Fallen Order." | Credit: Getty Images by Amy Sussman

With theme park attendance drastically limited as a result of the pandemic, Disney is looking to recoup the lost in-person revenue by making some formerly park-exclusive merchandise available to everyone. For those who still feel uncomfortable about travel or visiting a theme park, Disney is making it a little easier to get in on the “Star Wars” hype while staying safe at home.

According to Geek Culture, Disney Parks is making some Galaxy’s Edge merchandise available on the company’s shopDisney.com webstore on Sept. 28. Some of the products available include universe-influenced apparel from the Black Spire Outfitters store in the park, and also the to-scale lightsabers, which we wrote about before due to the video-game tie-in. There are also plenty of toys available.

In celebration of products direct from Star Wars: Galaxy’s Edge coming this month to @shopDisney, @DisneySprings and Downtown Disney District, vote for which legacy lightsaber you hope to see next! https://t.co/G7soFMfHZ1 pic.twitter.com/XYcyrneRqv

Also starting this week, Disney Springs in Lake Buena Vista, Fla., will have some “off-planet” “Star Wars” merchandise for sale.

For the first time ever, Star Wars: Galaxy's Edge merchandise will be shipped directly from the planet of Batuu and will be available at Star Wars Trading Post at @DisneySprings beginning Sept. 22! Read more: https://t.co/bbCp0SVh4I pic.twitter.com/Rxjz9MI0Yt

One thing that will be missing from the e-commerce platform are those very cool (and probably impractical) Coca-Cola bottles that are shaped like spherical Thermal Detonators (which Sean and I discussed on the podcast after he got back from the park).

Nearly every business has had to find ways to recoup lost revenue during the pandemic, and even a company as gargantuan as Disney with an intellectual property cash cow like "Star Wars" is no exception. The exclusivity factor will definitely return once it's safe to open the park to full capacity and travelers feel more confident, but in the meantime, this is a good alternative for retaining customers and sewing some good will among "Star Wars" fans who might not have been able to visit the park even without a pandemic.

Just like sports teams bringing promotional products to the fans from home, entertainment businesses will need to do the same. We're watching movies at home, why not bring the marketing to our homes, too?

So, for all of us who dreamed of being able to one day order a full-sized lightsaber off the internet, dreams do come true.