Since nearly the beginning of time, Washington State University's flag has rippled proudly over the crowds of ESPN's "College Gameday" broadcasts. The Cougars' crimson and gray banner has been as permanent a staple as Kirk Herbstreit and Lee Corso since 2003, with fans waving the flag on-camera for 224 consecutive Gamedays.

And that could all come crashing down this weekend, thanks to some weird rules at Walt Disney World.

This week, Gameday is broadcasting from the amusement park before the Florida Gators face off against the Miami Hurricanes at Camping World Stadium in Orlando. To Washington State fans' chagrin, some fine print in the Mickey Mouse bylaws dictates that no one can bring "flags, banners, signs, horns, whistles, large megaphones and artificial noisemakers" into the park. So, basically, Gameday fans can't bring anything that they typically bring. Have you watched it before? It's basically only flags and signs.

At this point, they might as well have it at the dang library.

Though we're getting down to the wire, the WSU faithful are trying to work some magic to see their colors flying in the Magic Kingdom.

According to NBC Sports, Tom Pounds, who originally started the tradition of waving the WSU flag at every College Gameday event, said the school's booster club is working with Disney to find a way around the rule. He added that "it wouldn't be a real college football Saturday without College GameDay and Ol' Crimson together."

So, if this rule stays in effect, it's going to be a very strange looking Gameday broadcast for those who regularly tune in. Next they'll tell Corso that he can't put on a mascot head, or that he's contractually obligated to put on Goofy's head instead of Sebastian the Ibis'.

Whatever the ruling, we didn't want to ruin the streak. So, with a little help from our friends at College Hill Threads out in Seattle, we flew the crimson and gray from the PM offices in Philadelphia. We haven't hosted Gameday here in the city since 2016 (go Owls, baby), but we hope it still counts for something. 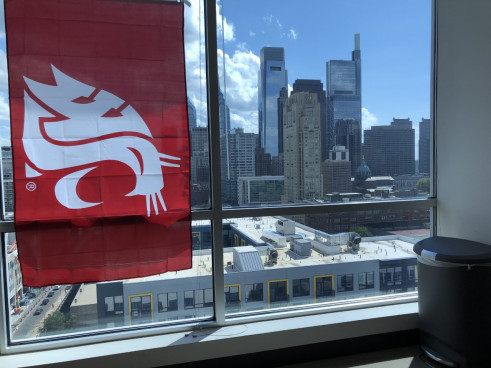