In her 1913 poem “Sacred Emily,” Gertrude Stein declares “Rose is a rose is a rose is a rose,” giving us a precursor to today’s ubiquitous and highly less poetic “It is what it is” notion. Had the celebrated scribe been a contemporary writer, she might have had to alter her thinking thanks to The Walt Disney Co. Banking on the success of “Beauty and the Beast,” which, through Wednesday, had generated $461.9 million in global ticket sales, the entertainment conglomerate is peddling a promotional cup that includes the film’s enchanted rose, and consumers have elected to wait in long lines to pluck a few for posterity.

The movie, a live-action remake of the 1991 animated classic, opened March 17, but the aforementioned tumbler began to become an internet sensation a few days prior to that date because of eager eBay sellers. The online availability stems from their physical presence at Disneyland, whose Red Rose Tavern is the lone location hawking the coveted cup. The $15 item, whose interior component serves as a crucial plot element to the “tale as old as time,” to quote the theme song, has inspired fans to gather at the Anaheim, Calif., eatery for long stretches, with Los Angeles Times reporter Todd Martens noting a two-hour wait to secure one and a Daily Mail piece stating four-hour tests of endurance and interest have also occurred. 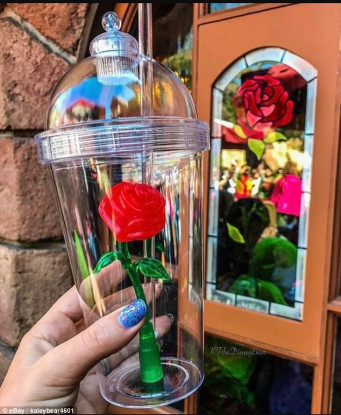 The $15 cup has made for a lucrative March for the Walt Disney Co. (Image via dailymail.co.uk)

The immense enthusiasm for the promotional cup, which includes a lid-situated mini-strobe light, has led many Golden State visitors to purchase it simply to show their admiration for the connection that the titular characters nurture in the movie. The cup’s exclusive tavern availability, though, has brought out the capitalist in quite a few folks. eBay has been a benefactor for them, with one ambitious individual seeking $695 for the promotional product heavyweight.

While one can wonder if the seller will ultimately have a taker for that offer, what seems “certain as the sun rising in the east,” in another homage to the title track, is that the cup and the hit film, with Emma Watson and Dan Stevens as the leads, will continue to be massive moneymakers and memory creators.