On Display: Selling to Trade Shows and Their Exhibitors

We spoke to Chelsea Peabody Bohannon, strategic and media relations manager for AmericasMart Atlanta, an international gift and home furnishings market that showcases wares year-round, but also hosts a variety of events throughout the year.

How Trade Shows Use Promotional Products
At AmericasMart, there are 1,500 permanent showrooms in its three-building downtown Atlanta complex, but more than 11,000 temporary exhibits are on display over the course of its 16 annual markets and shows. While the venue houses the world’s single-largest collection of home, gift, rug and apparel products, its vendors also find promotional products useful to help promote themselves during the trade shows.

“Promotional products are used by trade show organizers to keep the market top-of-mind for buyers as they make their market attendance decisions, and by exhibitors to make their products stand out among the thousands of lines showcased at one buying opportunity,” Peabody Bohannon said. But trade show hosts’ and vendors’ usages of the items may vary, so it’s important to know what the goal is for each promotion. A host may want to make attendees—typically retailers or designers—more comfortable with a branded bag or water bottle.

“Portable branded items, like bags, badge holders and refillable water bottles, continue to promote the trade show when attendees take them home,” Peabody Bohannon said. “Many trade show attendees use the same items at multiple markets, so an especially strong bag or appealing badge holder from one market may be used for many markets to come—both at the facility and elsewhere.

“Promotional items can also be a revenue generator when trade shows charge exhibitors to display the items outside of their specific location,” she added. 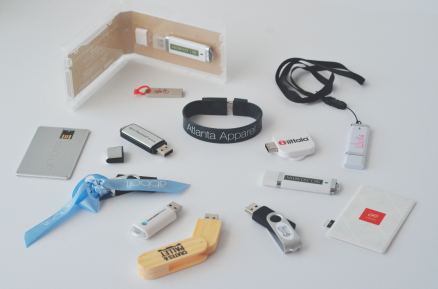 As for exhibitors, it’s all about reminding buyers of their brands. “The promotional products are used to keep their merchandise top of mind while buyers are at the market, and when they go back to their stores and offices,” Peabody Bohannon said. “Exhibitors figure that a retailer is more likely to call and reorder a product if their pen reminds them.”

What’s Popular?
Previous items Peabody Bohannon has seen at markets include USB drives with product information stored on them, pens, keychains, drinkware, magnets, notebooks and hand sanitizers. She also noted that some use two-piece items to direct attendees to their booths. By using items like salt and pepper shakers, vendors can place salt shakers in an open location and direct attendees to their booths or showrooms for the pepper mates.

“Items are used to encourage buyers to visit a particular booth or showroom or to remind buyers of where they found a certain item,” she said. “Temporary booths are more likely to use smaller items, while permanent showrooms have the room and resources to use bigger items, like bags, notebooks and glasses.”

In Peabody Bohannon’s opinion, bags and badge holders remain the top choices for promotions at AmericasMart.

“They are popular with exhibitors because the buyers become walking advertisements for the [product] line both at the market and at other trade shows they attend,” she said. “Buyers love bags because it lets them easily transport the sales sheets, catalogs and order forms they pick up throughout the market. They love badge holders because they help them keep up with the credentials they need to get into the trade show.”

Sales Tactics
Peabody Bohannon believes it’s very important to research the trade show before reaching out. Know if attendees are traveling by airplane and, if so, avoid large liquids or sharp items, like corkscrews, she said. Also, look at the business occurring at the event.

“As retailers and designers, buyers at AmericasMart are very discerning about their products—they are not interested in the off-brand version of the product when they can order the real version at the show,” she said.

Also, learn their timelines early on. Some have an annual trade show, while others might have two a year or more, like AmericasMart, which has events, varying in size, throughout the year. “Items for annual trade shows can be ordered nine to 12 months out, while more frequent trade shows may only be able to work two months out,” she said.

But even if you know the schedule, be ready for changes—even sudden changes.

“Flexibility is very important for organizers, as changes can occur right up to the floor opening,” Peabody Bohannon said “A last-minute sponsorship might be sold for an item resulting in a logo needing to be added or [foot] traffic might be up so more water bottles or glasses may be needed.”