Here's What You Can Do With Your Eclipse Glasses Today 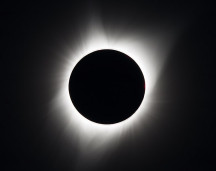 Your eclipse glasses from yesterday could benefit others abroad.

Yesterday's eclipse sure was something, eh? For us in the Northeast, it was a little cloudy, but we still got a cool view of the rare phenomenon. (We'll spare you our crappy iPhone photos from the office window.)

So, hopefully, you viewed the eclipse with eclipse glasses to protect your vision. (And, hopefully, those glasses didn't have any spelling errors on them.)

But, since eclipses don't just happen every week or so, you're probably wondering what you should do with your glasses?

It turns out you have a few options.

First off, remember that the glasses are likely made of paper. Because of that, they're recyclable. You don't need to do anything fancy here: Just toss em with the rest of the paper products you're looking to recycle. But, make sure you take the lenses out first. That part isn't recyclable, according to Lifehacker.

Aside from that, there's always the option of donation. That's a way of recycling in itself, and you directly see someone benefit from it.

While we're going to have to wait our turn for another eclipse, sky-gazers in South America and Asia will get to check out an eclipse in 2019. Astronomers Without Borders is collecting glasses to pass out to students.

"This is an opportunity for schools to have a first-hand science experience they might not otherwise have," Astronomers Without Borders president Mike Simmons told Gizmodo. "Many schools in developing countries don't have resources for science education, and this is a rare opportunity that inspires students and teachers, and shows them that science is something they can do. It can be a ray of hope for young people who don't otherwise see a path to a career like this."

Finally, you can always keep them! We in the U.S. are due for another eclipse in 2024, so those glasses aren't obsolete just yet!

USA Today reported that if the glasses were made by one of the 12 eclipse glasses makers that met NASA standards, they're good forever, as long as they aren't scratched, torn or punctured.

Especially since so many of these were promotional products, it's comforting to know that many of these items will live on, either waiting for 2024 or taking a trip abroad to check out the eclipse in 2019.

Chanel's 'Underwhelming' Advent Calendar Had Good Products and Packaging, But at Too High a Price