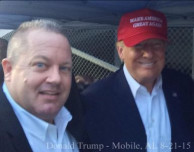 The distributor of Donald Trump's "Make America Great Again" caps is gearing up to sell her 1 millionth hat. (Image via Twitter)

With how ubiquitous "Make America Great Again" merchandise has become with Donald Trump's campaign and eventual presidency, it might be hard to believe it all comes from a single distributor. Well, it's true. And now, Christl Mahfouz is gearing up to sell the 1 millionth MAGA cap from her Ace Specialties Inc. headquarters in Lafayette, La.

Since 2015, Mahfouz has been the primary distributor for Trump campaign merchandise, like the hats, yard signs, buttons and T-shirts. And, since that time, Trump-related companies have sent her company checks for more than $21 million, per FEC records and Bloomberg.

Before her deal with Trump's campaign, Mahfouz's company was in danger of folding. Her primary customers were gas workers buying uniforms after oil prices tanked in 2014.

In July of 2015, Mahfouz noticed people wearing campaign apparel during a televised rally, and assembled a presentation including hat prototypes, T-shirt designs and a mock-up of a new website. She also had an indirect link to Eric Trump through past work on his charity foundation.

According to Bloomberg, Mahfouz was in Trump Tower a week later, setting up a presentation in his conference room in front of staffers. Her commitment to domestic manufacturing was especially a draw for them, and while they already had a manufacturer for the hats, she put the pieces together for other items. After a week to get everything in order, she was up and running.

How's that for a quick turnaround?

This proves a valuable lesson for promotional products distributors. In order to get the big deals, sometimes all it takes is asking for it. Well, asking mixed with being prepared, as Mahfouz was. After all, they say luck is preparation meeting opportunity.