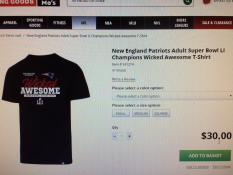 David Thomas, an Atlanta-based distributor who hails from New England, decided that the phrase “Wicked Awesome” would be a perfect phrase for Patriots and other Boston sports apparel. So, he trademarked it.

“This is a great industry to be in if you have a creative mind and vision, so it plays well to my skill set,” Thomas said. “Over the years, I desired to set up a second business to protect against industry, clientele and economy changes, and wanted something that I could trademark and sell on my own with no competition. Since I already had my infrastructure in place with wholesale apparel suppliers, along with my local embroiderers and screen printers, whom I use for my distributorship client orders, the next step was to pursue a trademark.”

In 2003, Thomas submitted a trademark application to use the phrase “Wicked Awesome,” and his registration was approved in 2005. Since then, he’s gotten the idea off the ground and worked with some high-profile clients.

“Wicked Awesome has evolved since its inception to work with specialty retailers, sports groups, web shops for small orders, and is now enjoying success in licensed apparel programs,” he said. “Currently, we have a working agreement with '47 Brand (an apparel licensee with the four major professional sports leagues and NCAA, to name a few), where '47 is producing their branded apparel imprinted with designs featuring the Wicked Awesome phrase along with logos of the Boston Red Sox, Boston Celtics, Boston Bruins and New England Patriots (Super Bowl LI Champions apparel items were delivered to retailers shortly after this year's game). '47 also produced three Red Sox-themed Wicked Awesome shirts during the 2016 season, one of which was a David Ortiz final season design.”

In contrast to his distributorship, Thomas said that working through ’47 brand made it much easier to form licensing agreements with these big-league clients. Since he’s grown the business, he’s divided the Wicked Awesome business into three sections—Identifier Line Apparel, which people can make whatever they want “wicked awesome” (Wicked Awesome Mom, Wicked Awesome Writer); Schools and Corporations, where the logos are added below the phrase; and the promotional products industry, where distributors can place apparel orders to include the phrase with their clients’ logos.

That doesn’t mean Thomas is out of the distributor game. This is just a different opportunity for him.

“My distributorship is still in operation, but my main focus is Wicked Awesome,” he said. “I am more interested in maximizing opportunities with the brand as opposed to swimming in the same distributor ocean selling promotional products. This is not a knock on distributors, as I have enjoyed 25 years in the industry as one. I have simply switched gears and am passionately pursuing independent, Wicked Awesome projects.”

The best advice Thomas had was that you never know where your business connections can lead to. It was a mutual connection that led to his agreement with ’47.

“You never know what can happen down the road, so maintain your customer relationships, especially those that share your vision,” he said. “If you have a vision, pursue it. I always believed in Wicked Awesome’s potential, even though a lot of [promotional product] industry people were skeptical when I discussed it with them. That's because it is an outside of the box idea. But one that works for me.”