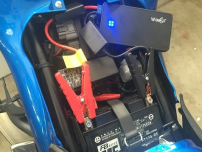 Blink Marketing Inc. is seeking damages from Paris Business Products Inc. over its sale of the Weego (pictured). (Image via Twitter)

A promotional products distributor is seeking $300 million from Paris Business Products Inc., Westampton, N.J., for allegedly cheating it out of commission from a new jump-starter for cars.

According to Law 360, Blink Marketing Inc., Franklin, Tenn., claimed that Paris violated the companies' non-circumvention agreement by selling the Weego mobile jump-starter through a sales program with Bosch Automotive Service Solutions Inc. to automakers, including Nissan, without finalizing a commission for Blink, which introduced the product to Nissan.

"By entering into the … supplier agreement without providing for any compensation to Blink, Paris intentionally interfered with Blink's business relationships with Nissan and Bosch," Blink claimed in the lawsuit, filed in the U.S. District Court for the Middle District of Tennessee, according to Law 360. "Paris' interference with Blink's business relationship with Bosch cause Blink to lose not only the ability to sell the Weego, but also several thousand potential other items not related to Paris or the Weego that Blink could have sold through the [sales] program."

After being introduced to the Weego product last year, Blink tested it and thought it would be a good fit for Nissan in March 2015. Nissan responded positively, saying that, if the product performed well, it could use it as a tool for Nissan service technicians, according to Blink.

Later, Blink was introduced to Paris, which acquired the Weego in 2014, and the two parties allegedly discussed Nissan's interest. In the complaint, Blink claimed that Paris was unaware of Nissan's interest in the application of the Weego, and that it had no intention of pursuing those interests. Ultimately, they decided to work together with Nissan, but Blink had Paris sign a nondisclosure/noncircumvent agreement to prevent Paris from working directly with Bosch, which manufactures the Weego.

However, Blink alleged that Paris only signed the document to start a business relationship with Bosch and avoid paying commission to Blink.

In October, Paris informed Blink that it had signed an agreement with Bosch in violation of the previous agreement signed with Blink, and Paris started selling the Weego through Bosch's sales program in December.

The lawsuit currently is in the U.S. District Court for the Middle District of Tennessee.