DJ Khaled's Billboard Dreams Were Squashed by His Own Merch Bundling 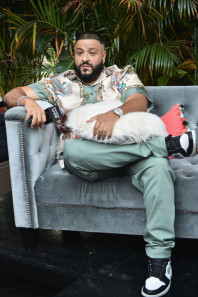 The main method has been to package the album in with bundles that include things like apparel, concert tickets and other merchandise. They've been successful, if a little sketchy on the actual pricing, for the artists in question.

One artist sort of shot himself in the foot by trying to go the bundle route to get his newest work on the top of the Billboard chart, though. That someone is DJ Khaled, and despite his trademark "We the best!" claim, his bundle idea backfired and he didn't get the No. 1 spot he was looking for.

Khaled bundled his new album "Father of Asahd" on Shop.com (via its parent company Market America). Only, instead of offering shirts or wristbands, like many other artists do, he bundled it with energy drinks similar to those 5-Hour Energy shots. Seems fine, right? The album that took the No. 1 spot, Tyler, the Creator's "Igor," also worked a little promotional bundle magic with clothing and faux-political lawn signs that said "Vote for Igor."

It turns out Khaled didn't read the fine print on Billboard's rules, though. The Washington Post reported that Billboard ruled that some of the Shop.com merchandise went too far by "encouraging unauthorized bulk sales."

Market America, a multilevel marketing company, has been accused of being an "illegal pyramid scheme" that unfairly targets Chinese American immigrants and pushes sales quotas, according to a 2017 racketeering lawsuit. As Deanna Brown, the president of the Billboard-Hollywood Reporter Media Group, told the New York Times, "We saw an organization encouraging purchases among their members by promising them material and organizational benefits."

Billboard disqualified all bulk sales from consideration for the charts, reportedly amounting to more than 100,000 album sales.

Khaled, not one to take the L here, reportedly planned to sue Billboard, but that's not confirmed. His entourage is pretty upset about it, though.

"We dispute their decision on behalf of DJ Khaled and, frankly, every artist who is forced to navigate bundling an album download with an inexpensive item that still effectively represents their brand," Desiree Perez, chief operating officer of the Roc Nation label, said in a statement to the Washington Post. "It's confusing and demeaning to the art. We're obviously not fans of bundling … but our hands our being forced by Billboard's desperate, last-ditch effort to keep streaming from eliminating what's left of music downloads."

Bundling is just the nature of the music industry beast now. People aren't going to buy albums as much when they can keep an entire library of music in their pockets or on their laptops. And as long as we have Marie Kondo telling us on Netflix to throw all of our stuff away, people are going to add less and less joyless clutter to their homes, especially as millennials move back into densely populated urban areas.

"There is this concept of giving the fans something that is unique and available for a limited time only, and that will almost surely sell out and not be available when the window closes, even though the music itself is always available on every device in the world," Larry Miller, director of the music business program at New York University's Steinhardt School, told the Washington Post.

It's like those Supreme drops that everyone goes nuts over and spends way too much money on. Manufactured exclusivity absolutely breeds hype, and therefore begets big profits for the artists in this case. When you combine that exclusivity with a physical item that shows off your status, combined with the perceived "bargain" of getting a T-shirt and an album for the price of one of those things, you create a successful promotion.

Is it the most honest means of selling music? Probably not. Are fans spending too much on a sweatshirt? Most likely. But are they still getting something good out of it? Absolutely. And, especially for a lot of smaller artists who aren't on the scale of DJ Khaled and will never have to worry about launching a Billboard chart campaign, selling their art is the way they can keep making it without having to work at a coffee shop on the side.

The problem going forward is that Billboard needs to become consistent and clear about what artists can and can't do when it comes to bundling.

2022 Top Distributors: How HALO's Rebrand Helped them Top Their Huge 2021

A Little Something Extra: How to Add Value to Your Promo Orders
Comments
The Top Lists