As of August, global air travel was reportedly down 85 percent year-over-year. The pandemic has taken away plenty of work travel, and given people a reason to avoid leisure travel as well.

But, like all industries right now, the air travel industry has found ways to pivot and still keep visible in front of people at home. Some airlines are offering "flights to nowhere," while others are giving away the packaged food that the likes of Jerry Seinfeld complained about. Australian airline Qantas saw an opportunity in the very at-home lifestyle people are living right now, and started selling the branded pajamas usually reserved for first-class passengers.

Who doesn’t want to feel like they’re flying first class, even when they’re on the couch?

Qantas’ pajama sale was limited to 10,000 sets, so it still has the exclusivity factor of real-life first-class travel. They also put together kits with snacks and skin care products also given out to first-class passengers. According to Qantas, each care package includes a set of pajamas, an amenities kit with moisturizer and lip balm, individually wrapped Tim Tam chocolate biscuits, one pack of smoked almonds, and a packet of 10 tea bags. 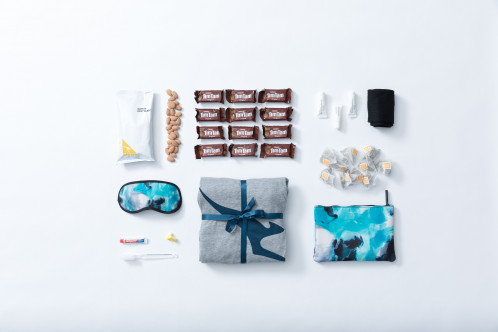 “We already provide goods to some of our charity partners, including Oz Harvest and Neil Perry’s Hope Delivery initiative, but these packs offer Australians the opportunity to reach out to those they’re separated from due to border restrictions and lockdowns,” Qantas executive manager of product and service Phil Capps said in a press release. “Qantas PJs are always popular, and with people spending a lot more time at home and wishing they were traveling somewhere, we think receiving a surprise pair in the mail will be very well received. And probably very well-worn by the end of all this.”

All in all, that sounds pretty nice for an evening at home full of self-care, doesn’t it? And for those like George Clooney’s character in “Up in the Air” who don’t know what to do when they’re not traveling, this could be a good way to ease that pain.