Italian fashion brand Dolce & Gabbana is looking to get political with its latest T-shirt design. According to Business Insider, the company is selling a $245 T-shirt that reads "#Boycott Dolce & Gabbana." 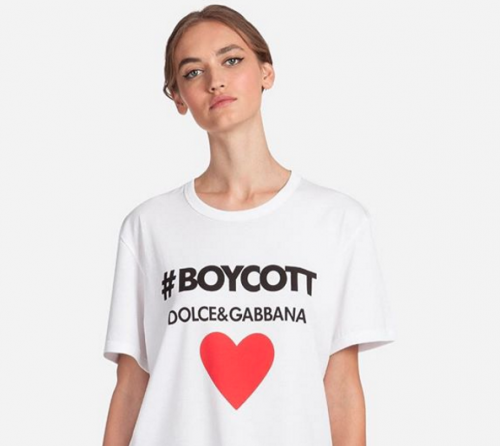 The T-shirt's unveiling also came with a video showing a fake protest with models wearing the T-shirt and yelling "boycott" as confetti falls upon them.

While a T-shirt calling on consumers to boycott its own brand seems like an odd marketing move for the clothing company, it comes with a politically motivated backstory.

The clothing brand has received criticism recently for dressing Melania Trump after she wore a $51,500 Dolce & Gabbana jacket at the G-7 summit in Catania, Italy. But, the clothing company has taken a stand and thanked Melania for donning its clothes, which was a disappointment to a portion of consumers.

Time will tell if this boycott campaign brings in revenue, but it's certainly a risk to launch a political campaign as a high-end brand. Not only that, but the company is creating their own negative press calling for a boycott of its own brand. It's a bold move, but they say that no press is bad press, right?