Promotional Roadwork? Domino's Is Paving Potholes to Save Pizza

Have you ever driven over a pothole and thought, "Gosh, this city can't fix anything right, can they? Where's Domino's when you need it?"

You probably haven't, because that sentence is insane out of context. It would make a little more sense if you knew that Domino's was actually paving over potholes in order to "save pizza" from getting jostled during delivery.

According to a press release, the campaign started on Monday, when Domino's rolled out branded dump trucks and steamrollers in Texas, Delaware, Georgia and California. 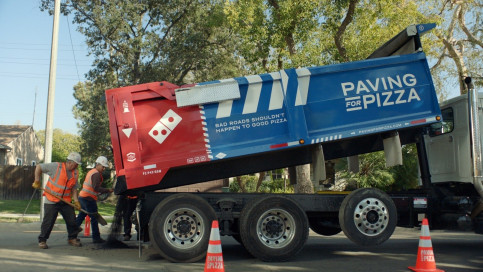 Domino's is saving pizzas by paving over potholes across the U.S. | Credit: PRNewsfoto/Domino's Pizza

"Have you ever hit a pothole and instantly cringed? We know that feeling is heightened when you're bringing home a carryout order from your local Domino's store," Russell Weiner, president of Domino's USA, said in a press release. "We don't want to lose any great-tasting pizza to a pothole, ruining a wonderful meal. Domino's cares too much about its customers and pizza to let that happen."

In cities like Philadelphia, where potholes are common and sometimes the maintenance leaves a lot to be desired, people are asking Domino's to come fix the streets.

@dominos if you come to Philly I swear to God I’ll go buy a pizza right now https://t.co/lXQJaBQkjN

Does branding a pothole count as graffiti, or just savvy branding? It's kind of a Batman situation—solving the city's problems in a possibly less-than-legal fashion. This is vigilante marketing, and it's something we haven't really seen before.

Could Domino's be the hero we need, but not the one we deserve right now?