Two months after it knocked down its longtime competitor, Pizza Hut, to become the leading pizza chain domestically and internationally, Domino’s Pizza is again making headlines thanks to a practice that dates back 41 years. Come Tuesday, the massive moneymaker figures to help Christie’s fetch some dough, as the auction house will be accepting bids for a Rolex Air-King that bears the revered pizza chain's tile logo.

On its website, the London-based seller notes that the item is “an attractive time-only watch on Oyster bracelet that is extremely wearable” and explains that Domino’s founder Tom Monaghan designed its distribution to reward franchise employees with the product when they met sales quotas. Having begun that tradition in 1977, the bigwig eventually altered the agreement with the timepiece provider, with the logo moving from the dial to the bracelet.

Offering the original commodity, which it says the duo likely issued in 1989, Christie’s will call for a starting bid of $3,000, with overseers foreseeing obtaining as much as $5,000 for the stainless steel item. 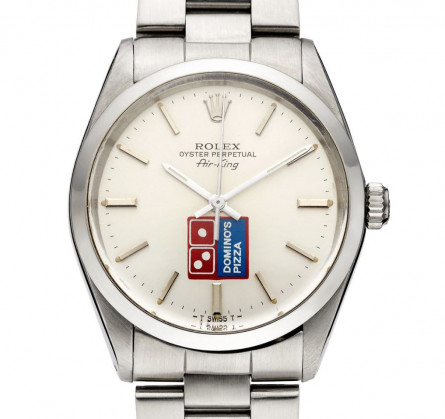 On May 1, Christie's will auction off this Rolex watch that bears the Domino's Pizza logo. | Credit: Christie's

If the pairing of Rolex with Domino’s sounds like a strange decision to you, know that you have company, as Yahoo Finance explains how the watchmaker has typically shied away from co-branding opportunities. Given that Domino’s has benefited from the partnership for more than four decades, though, puzzled parties must realize that Rolex probably made the move to add a likewise enterprising contemporary to its fold—even if pizza isn't the first thing that comes to mind when pondering promotional pals for a reputable watch business (and vice versa).

We could even suppose that Rolex teamed with Domino’s because it could foresee its eventual mastery of the market, but that would be a stretch, especially since the business partners did not engineer an opportunity for consumers to secure the watches, too. In short, Monaghan seized a chance to motivate his hires, and Rolex welcomed the opportunity to sell Air-King models.

Based on their collaboration, Paul Altieri, whose Bob’s Watches peddles pre-owned and vintage Rolex watches, holds that the double-logoed offering will add value to the auctioned selection. Dual mentions that include Rolex, according to the proprietor, typically average a 10- to 20-percent greater value than non-branded vendibles. The auctioneers would definitely reach that range if the watch pulls in between $3,300 and $4,200, as Air-King watches go for between $3,000 and $3,500.

Time is ticking away for prospective owners of the product to consider their bids, and since Domino’s is on a hot streak, the logo-containing device could very well benefit from an admiration for nostalgia and an appreciation for contemporary success to make one end-user quite happy.