If the number of merchandise queries determined presidential elections, Donald Trump would have an advantage over Hillary Clinton. According to Multichannel Merchant, the Republican presidential nominee has Clinton beat in merchandise searches.

Currently, Trump is outnumbering Clinton at a ratio of almost five-to-one. But, those aren't the only numbers to consider. The numbers immediately following each candidate's respective political party conventions indicated that Clinton received a bigger increase in merchandise searches. 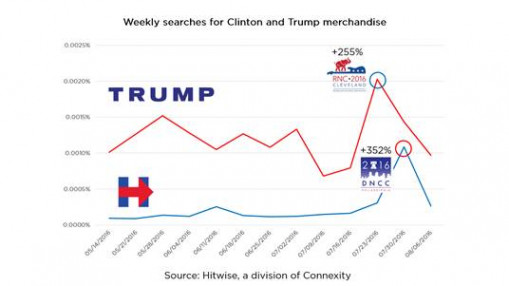 So, while Trump might be polling worse than Clinton, people seem to be disproportionately more interested in Trump's merchandise—specifically, Trump hats, signs, bumper stickers and shirts. Alternatively, the No. 1 item Clinton searchers are looking for are signs.

John Fetto, senior analyst for Los Angeles-based Hitwise, a division of Connexity, the company that executed the study, provided Multichannel Merchant with a few speculations for this imbalance.

"Could this mean that there's a stronger passion among Trump's supporters?" said Fetto. "Maybe. There certainly seems to be more Americans willing to part with some cash for a now iconic Trump hat or some other merchandise."

But Fetto also suggested that it could be because Clinton has a better funded and more sophisticated campaign, which enables her to market her merchandise more, so supporters don't have to do as much searching.

Whatever the reason, it will be interesting to see if these numbers have any bearing on the election result in November.