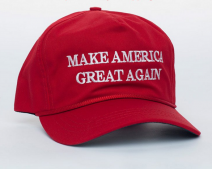 If your early holiday present to yourself was a genuine, autographed Donald Trump hat, you might want to give it another look. According to ABC News, the president-elect didn't sign his own autographed items; a computer did.

Trump's campaign utilized the autographed merchandise to raise money for his presidential campaign, but it appears it actually was an autopen machine that added the signature.

The "signed" items went up for auction on eBay thanks to resellers wanting to profit from Trump's election win. But, instead of reaping the profits, the sellers learned that all signatures were identical. This indicates that a human being couldn't have signed all that merchandise because there would have been some variances in the signatures.

It turns out this disclosure was in the fine print. The listings said, "Limited supply of hats which include an autopenned Donald J. Trump signature."

But, purchasers of the merchandise are not happy about the inauthentic signing.