Don't Miss It: The Best of PPAI Expo Day One

We’re at PPAI Expo in sunny Las Vegas! What’s that? You weren’t able to make it this year? Or maybe you're here and there's just too much to see? Well, worry not. We’ve got you covered.

As soon as the exhibit hall doors opened his morning, we were all over the place looking at new products peeping stylish booth displays and chatting with the pros about the exciting year ahead in the industry.

It’s always hard to choose our favorite things from PPAI Expo, but we tried our best to narrow it down to a few stand-out pieces from day one. 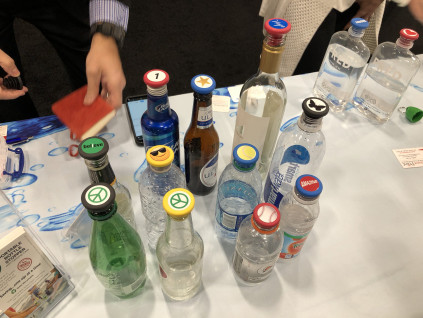 Sipsee CEO Dan Garcia’s time in the Navy allowed him to see the extent of wasted plastic bottles in the ocean as well as on land. After delivering water bottles to areas after a tsunami, Garcia noticed that, in addition to the environmental problem, people lost track of which bottle was theirs, thus causing them to prematurely throw it away. He and his wife, company President and Founder Kirsten Garcia-Hanson, came up with the idea for the Sipsee, a bottle stopper that fits into virtually any kind of bottle, with the goal to eliminate waste by helping people keep track of their drinks. With a spot for a label on top, they’re a fun, functional and environmentally-conscious newcomer to the promo game. 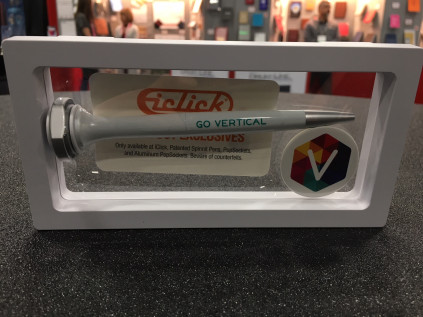 In addition to some killer packaging, iClick's Spinnit Pen has a built-in fidget spinner on the top, but with a twist. This one is more streamlined than the standard three-pronged spinner, so it takes up less space atop the pen and makes our boss less likely to notice we're spinning constantly in meetings. (Shh! Don't tell.) iClick also has on display a variety of new products available with 24-hour production. Stop by and spin away. 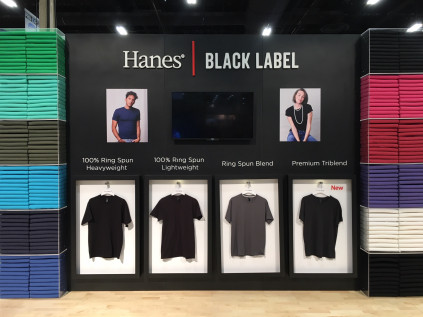 A rebrand of sorts, this collection from Hanes features existing items from the supplier's catalog, repackaged and relabeled (with, duh, black labels) to showcase how several product lines can work cohesively for one promotion. The designs and booth display have a retail-ready feel that looks as at home at H&M as in a client presentation, and the collection includes everything from Hanes' classic Beefy-T to newer, more modern tri-blends. 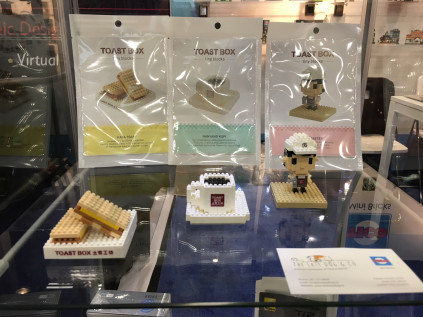 New to the U.S. promotional products industry (but with an established presence in Asia), The Lazy Dog & Co. caught our eye with its line of custom TICO Mini Bricks building blocks. As unabashed AFOLs (Adult Fans of Lego), we had to stop by. The supplier has already produced block sets for an impressive array of companies overseas—including Starbucks and Coca-Cola—and is able to turn just about any design, from logos to buildings to mascots, into a set. If you need us, we'll be building a big castle or something. 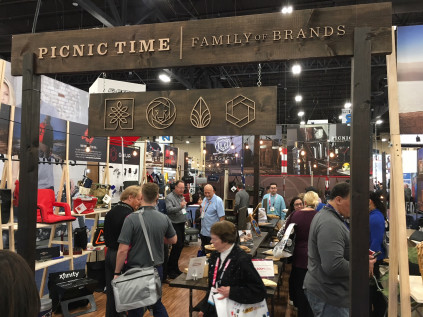 Talk about cohesive branding. Picnic Time's booth is earthy and outdoorsy, warm and inviting—deliberate choices designed to showcase the supplier's similarly-themed product lines. The string lights and earth tones made us want to set up shop around a bonfire and roast some marshmallows, but we have a feeling Mandalay Bay Convention Center staffers wouldn't be too keen on that. We'll settle for just browsing the booth. 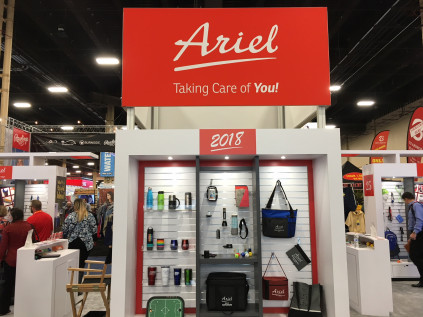 We took a few minutes to chat with Ariel Premium Supply’s Christopher Duffy about the company’s new booth this year. It has some killer glowing tables that beautifully display its stress reducers (including the new Serenity Squishy, which utilizes a softer foam than the typical stress reducer), and a design that maximizes traffic flow and views without causing a traffic jam. The function-first mentality carried over into the company’s new product offering, including some super-cool Bluetooth-speaker water bottles. Duffy also showed us a new, retail-inspired bag collection, which uses bold fashion-forward colors and is full of helpful features without compromising style.

Who doesn’t love a pen with their name on it? Well, we don’t know the answer to that because their name isn’t on a pen, so they will remain anonymous. Hub Pen Company’s live laser-engraved personalization at the booth isn’t new to Expo veterans, but it’s always one of the highlights. We also got to check out some of the company’s other offerings, like the Eclair pen, which has a sweet light-up logo.

Blue Generation Knowing Style When They See It (Booth 1857) 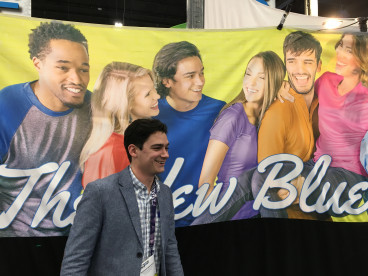 If you passed Blue Generation’s booth and saw its “New Blue” banner, you may have spotted Digital Content Editor Brendan Menapace’s smiling face. Thrust in at the last minute during a catalog shoot, it was his first modeling experience. Obviously Blue Generation was so impressed with his look that they decided to keep the ad in the rotation. Thanks, guys!

Exhibiting at PPAI Expo and have something awesome you want to show off? Let us know about it! Email editor Brendan Menapace at bmenapace@napco.com and we'll stop by. We might even include you in some of our other PPAI Expo show coverage!