After the Doritos Debacle, Do We Really Need Gendered Packaging? 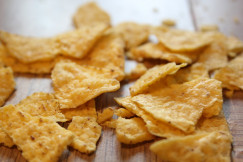 If you watched the Super Bowl, you may have noticed PepsiCo’s hilarious Doritos/Mountain Dew commercial featuring Peter Dinklage, Missy Elliott, Busta Rhymes and Morgan Freeman. It was undoubtedly one of the highlights of the night as far as advertising goes, complete with great special effects, expert lip syncing and a total embrace of the bizarre. PepsiCo should have been reaping the rewards of its success, but instead the company very quickly became the focus of the Internet’s collective ire only hours after its commercial was aired.

The reason? Indra Nooyi, CEO of PepsiCo, said in an interview that the snack brand was working on a line of Doritos chips designed specifically for women. That’s right, the CEO of PepsiCo, a woman, was quoted suggesting that women would enjoy their own line of Doritos because they don’t like to lick their fingers, crunch loudly in public or pour crumbs straight from the bag into their mouths. Perhaps she was speaking from a personal standpoint, but it’s safe to stay that these comments were at best entirely stereotypical and at worst, well, a little bit offensive.

Nooyi was quick to qualify her claims, saying the following about the brand’s strategy with marketing to specific genders. “It’s not a male and female [scenario] as much as ‘are there snacks for women that can be designed and packaged differently?’ And yes, we are looking at it, and we’re getting ready to launch a bunch of them soon.”

Doritos is making ‘lady-friendly’ chips that don’t crunch, for women.

Not only that, but if it does make noise, it will be immediately interrupted by the crunching of a male chip. #LSSC pic.twitter.com/VadlbEq7HC

People all over the internet were quick to take offense to Nooyi’s comments, and PepsiCo has taken some flak for the supposedly planned release of these “Doritos for women.” The brand has responded, however, denying that it plans on releasing any such product. A spokesperson for PepsiCo had the following to say to Adweek: “We already have Doritos for women—they’re called Doritos, and they’re enjoyed by millions of people every day.” While this is an admirably clever response, it’s hard to believe that a CEO would tease the release of a product that didn’t actually exist, especially not a CEO as successful and well-respected as Indra Nooyi. Whether or not this product was actually planned to be released, it most certainly will never see the light of day now. Regardless, it brings up an important debate about gender-specific packaging and advertising.

While Nooyi’s comments regarding so-called female chip consumption preferences are remarkably absurd and probably not all that accurate, the remark she made about different packaging is important to look at in context.

Gendered packaging is quite common, and is used for a range of products including cleaning supplies, toiletries, packaged food, children’s toys and even beer. While people are quick to call out ridiculous gender-specific items when they see them, there’s a scientifically studied reason as to why brands continue to market products to specific genders.

In a 2015 study, Luke Zhu, an assistant professor of business administration at the University of Manitoba, alongside researchers from Yale and INSEAD, showed how gender-specific packaging and product design contributed to significant psychological responses from male and female test subjects alike. The study had subjects separate types of food into categories based on perceived gender preferences, such as baked versus fried chicken, and by associating healthy food with femininity and unhealthy food with masculinity.

Another part of the study had subjects respond to blueberry muffins, first by their packaging and then by taste. Researchers created two types of packaging, one with the word “mega” and an image of a football, the other with the word “healthy” and an image of a ballerina. Then they created two other types of packaging that mixed and matched the messages and images. The results showed that subjects were more willing to purchase muffins with the matching message and image associated with a specific gender, and that they often went so far as to claim that these muffins tasted better, despite being the same.

This study shows that gendered packaging really does have an effect on how consumers perceive a product and whether or not they are willing to purchase it. So it’s no surprise that brands seek to market items to specific demographics based on gender. It does, however, raise an important question: is the association of imagery and messaging with gender something innate to humans, or is it an acquired reflex based on societal norms? More importantly, if the second scenario is true, what happens when society inevitably begins to change?

While this might seem entirely theoretical or too speculative, there is research that shows that gender, as we currently understand it, is shaped to a great degree by society, in particular by the media we consume and by traditional views of what it means to be male or female.

For anyone familiar with the current social and political atmosphere in the U.S. and around the world, this should come as no surprise. In fact, we need only to look at the examples of public backlash against gendered packaging to gain some insight into shifting societal views on gender. For example, Kinder faced criticism by customers in the UK after releasing Kinder Surprise Eggs with gender-specific colors and toys. The Kinder Surprise Egg packaged in blue foil contained a toy car, while a pink one had a small Hello Kitty figure inside. While the eggs didn’t have anything written on them that would indicate whom they were intended for, folks in the UK saw it as an attempt to associate the toys and colors with masculinity and femininity, and many were unhappy and didn’t hesitate to let the company know about it.

While some products, such as tampons, are designed and packaged specifically for women, there are plenty of products that receive the same gendered treatment despite being relatively similar or even exactly the same. Take, for example, disposable razors and the so-called pink tax. While these razors look and work the same for men and women, ones that are pink and packaged specifically for women tend to cost more than those made for men. For more examples of similar disparities and strangely-gendered products, check out this roundup of products marketed to men and women for seemingly no good reason at all.

After you have a laugh—seriously, some of these are pretty ridiculous—take a moment to think about products you have purchased based on similar marketing strategies and wonder whether or not, for example, a Hungry Man frozen dinner is any more “manly” than a Lean Cuisine, or if a brick-like protein bar is actually any better at fueling your athletic endeavors than a Special-K bar. If you really think about it, gendered marketing and packaging is pretty good at influencing how we make purchasing decisions. But does it really have to be that way? Do we really need our food to tell us that we are, in fact, men and women? What about people who don’t identify as either?

Should only men eat protein or massive quantities of meat? Should it matter whether a razor is sleek, or thin, or colored pink if it’s going to be used by women? Should women only eat chips that allow them to remain silent and clean and proper? If you answer yes, then to each their own. But if it happens to be no, then what messages do our purchasing decisions send to marketers? We can’t exactly blame them for following scientifically-researched patterns in order to market products, but we can be conscious about what we buy and why, if not to refute ridiculous stereotypes, then at least to get brands to stop making fools of themselves.

Catch It If You Can: Examining the Impact of Fraud

The Jumbo Roll Market Is Growing — Are You?
Comments
The Top Lists