Remember that six-foot cooler that Dos Equis released so we could all still enjoy each others’ company at a backyard cookout but maintain social distancing? A lot of people might tell you that Labor Day is the end of cookout season, but Dos Equis is making an effort to “save our Saturdays” by re-releasing the Seis-foot cooler and introducing a few more fun products.

For the sake of appeasing those people, let’s just rebrand “cookouts” to “tailgates,” and we’re much more fall appropriate. Since we can’t go to football games this fall, tailgating from home is the new phenomenon that companies like Dos Equis are trying to make a little easier and more fun. 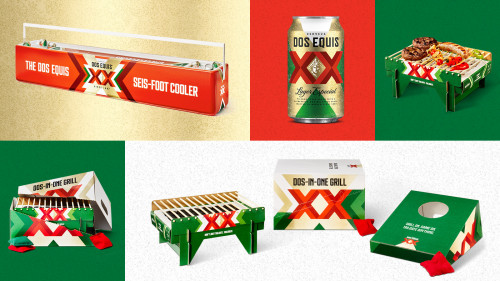 “Rather than letting fans punt on fun, Dos Equis is getting creative,” the company said in a press release. “Starting today, with a simple ’S.O.S.’ text to 77000, fans can win a most interesting collection of tailgate gear, including the Seis-foot Cooler—part cerveza chiller, part six-foot-long social distance measuring device; a ‘Dos-in-One’ grill pack, featuring a single-use charcoal grill inside a box that transforms into a miniature cornhole set; all-access TV streaming codes to catch live game action; credit toward the purchase of ice-cold Dos Equis; and more.”

That’s a pretty solid lineup, and is similar to other promotional campaigns we've seen recently that encourage people to celebrate at home in the absence of live sports.

And, similar to what the likes of Pizza Hut did with branded delivery trucks, some lucky Dos Equis customers might have their “Save Our Saturdays” kit delivered by a branded El Camino. “No matter the circumstances, the ritual of tailgating will still be a part of the picture this fall, all thanks to the efforts of a Most Interesting Beer,” the company said.

What's In the 2022 Oscars Gift Bag? From Promo Staples to Plots of Land in Scotland
Comments
The Top Lists