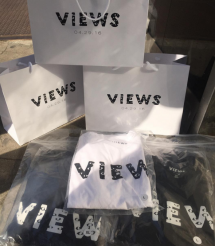 With Drake's new album, "Views from the 6," set to drop April 29, fans eagerly are devouring any information the artist supplies. Earlier this week, Drake announced a cryptic message on Twitter, indicating fans should stop by a specific address in New York City at 4 p.m. April 18.

Those who were able to check out the event were rewarded with a pop-up merchandise shop, powered by Apple's Beats by Dre, according to Stereogum. Unlike Kanye West's pop-up shop in March, Drake's event gave away merchandise for free in support of the upcoming LP.

Naturally, the lines to get into the pop-up shop were vast, but that did not deter fans from putting in the time. Inside the pop-up shop, fans were rewarded with minimalist black and white T-shirts with "Views" imprinted on the front.

Drake announced on Twitter yesterday that he was doing another pop-up shop in Miami, which took place at 5 p.m. Similarly to the New York event, fans lined up in droves, and after waiting in line for two hours, were rewarded with the same 100 percent cotton T-shirt that was made in Mexico, according to the Miami New Times.

No word yet on whether the artist will announce similar pop-up shops in any other major metropolitan cities, but it's safe to assume that if he does, it will be another fan frenzy.

Either way, these two pop-up shops, alone, stirred up a ton of hype for his "Views from the 6" album release.