Duke University is dealing with two instances of a player's likeness being sold illegally. | Credit: greensboro.com

Perhaps you've heard the phrase, "Quis custodiet ipsos custodes?" It's Latin for "Who can watch the watchmen?" (And, it's also referenced in "Watchmen" and "Star Trek," but that's a topic for another day.) In the news today, however, we are grappling with the question of who can counterfeit the counterfeiters. At least, that's an issue Duke University is trying to solve in regards to unauthorized basketball T-shirts.

Duke University freshman basketball player Marvin Bagley III's family decided to bring their own handmade T-shirts to Saturday's basketball game. The T-shirts featured Bagley's likeness, and according to the Greensboro News and Record, they were a huge hit. So much so that an online retailer started selling the same designs on shirts, mugs, phone cases and hoodies.

Because this online retailer has no ties to Duke or the family, neither sees any of those profits. Bagley's father, Marvin Bagley Jr., expressed his anger over the reproductions on his Facebook page.

“THESE CROOKS on this website tried to copy my shirt and ILLEGALLY profit on my son’s name, image, and likeness!" he wrote. "PLEASE DON’T BUY THIS BS that’s attached to this link!!"

This all seems simple enough—this retailer shouldn't be able to profit off a college basketball player without the family's permission, but it's not as simple as that. NCAA rules prohibit athletes and their families from profiting off the player's likeness, so what Bagley's family did in the first place was actually illegal.

It looks like Duke University is aware of the problem, and is in the process of stopping all production and sales. It's safe to assume that means the university will also stop Bagley's family from selling the T-shirts, but Bagley's father seems to disagree, according to another Facebook post. 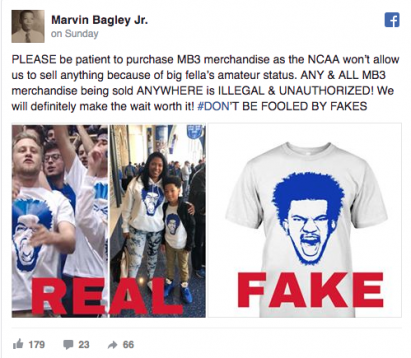 In this case, we've got two counterfeiters. Even though one of them is Bagley's actual family, they are also operating an illegal business. We will see what Duke University decides to do in this case, but it's definitely a unique scenario.

FC Barcelona, One of the World's Biggest Sports Teams, Might Sue Nike Over Botched Replica Jerseys

Nike Pulls All Redskins Merch, Which Might Actually Cause the Franchise to Change the Name

Parades and Celebrations May Be Canceled, But Pride Month Merch Is Booming