We will never find ourselves short on traditions in the U.S., and we are always eager to add a few more to our list. Thanks to a partnership between Dunkin’ and Saucony, it is starting to look as if we can come to expect an annual sneaker release in conjunction with the Boston Marathon. For the second consecutive year, the duo came together to mark the spring event, with the Saucony x Dunkin’ Kinvara 10 kicks leading us to envy everyone who has purchased a pair.

When Promo Marketing learned about this promotion last year, we initially found the partnership puzzling, given the seemingly diametric opposition that the two businesses have. We have come to see, however, that the union is giving true meaning to the “America Runs on Dunkin’” slogan that the donut dynamo has been banking on for years, and, therefore, we are all in with having this concept set the pace for profitable cross-branding opportunities.

The timing, for one thing, is phenomenal. In releasing the shoes more than three weeks before the April 15 endurance test, the companies are certainly going to be reaping the benefits of a sold-out product, thus intensifying the chance for end-users to give each entity enviable brand awareness. We wonder how many of the Boston Marathon runners snatched up the goods, especially since the field is pretty stacked, with 30,000 official entrants. 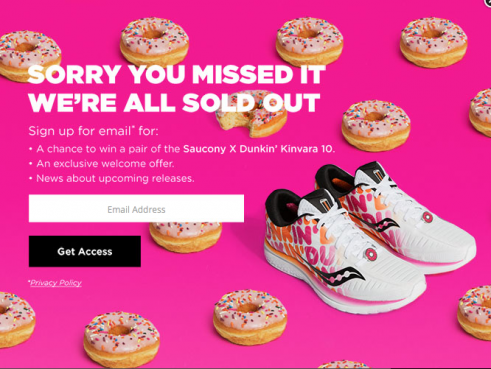 Another neat element of the dual promotional success becomes apparent when we inspect the list of sponsors, as Dunkin’ and Saucony are not among the helpers. Regardless, they are going to benefit greatly from the brainchild, especially Dunkin’, since Massachusetts is home to the second-most locations in the country. With respect to the shoes, which retailed for $120 for adult sizes and $65 for the children’s version, we consider the strawberry-frosted doughnut medallion affixed to the laces the best component. But the whole concept speaks to the evergreen call for products to be innovative, eye-catching and inspirational, in the sense that businesses will be eager to better themselves the next time they tackle an annual event.

The occasion need not be as grand as the Boston Marathon, but promotional products personnel will always have to be mindful of matching consumers’ demand for excellence with goods that fulfill that requirement. If they do so and continue to modify their product lines to fit changing preferences, they will always run away from the competition as pioneers. Thanks to the Kinvaras, which the two are offering to three winners through a sweepstakes, Dunkin’ and Saucony are racing to the forefront of Boston Marathon fans’ hearts, minds and wallets. Will anyone come to catch them at the tape?

'The Batman' Gets Promotional Oreo Cookies, Packaging in Europe