Dunkin Donuts Will Phase Out Styrofoam Cups by 2020 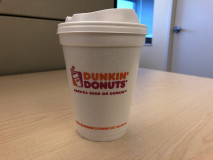 Dunkin Donuts announced that it plans to phase out plastic foam cups across all of its stores by 2020. The franchise will start in New York and California this spring, replacing the styrofoam cups with new double-walled paper cups.

This decision comes after Dunkin Donuts showcased some of its new stores in its hometown of Quincy, Mass., and social media users chided them for their supposed lack of environmental consciousness, according to CNBC.

The problem with the current cups is that they can't be recycled, and the main ingredient, styrene, has been called a potential carcinogen.

Dunkin Donuts customers have a weird history with these cups, though. Last year, the Boston Globe published a story about a Facebook comment section that got especially heated (A+ pun) when one New England customer posted a picture of her plastic coffee cup inside of a styrofoam cup, which acted as an insulator of some sort.

"Can your New England stores stop doing this?" she wrote, per Boston Globe. "Wasteful?!"

The internet reacted in its typical, level-headed manner, calmly raising their own arguments about the merits of not only the styrofoam cups, but the practice of using them as insulation.

Just kidding, they got really mad. It turns out, some people really love the styrofoam.

But, it seemed that more were on the side of eliminating the cups. In a few days' time, more than 2,000 people went to Dunkin's Facebook to voice their opinions.

This makes sense for Dunkin, as some relatively local communities near Boston have banned the use of polystyrene.

"Transitioning away from foam has been a critical goal for Dunkin' Donuts U.S., and with the double-walled cup, we were able to offer a replacement that meets the needs and expectations of both our customers and the communities we serve," Karen Raskopf, Dunkin Donuts' chief communications and stability officer, told CNBC.

It's also following the lead of McDonald's, which announced last month that it would also phase out styrofoam cups and packaging.