Dunkin' is one of the best in the business when it comes to using branded merchandise in combination with social media, but its latest collection takes the cake (donut). The brand last week launched a merch line based on a huge TikTok trend, and promised a second, TikTok-exclusive drop to come this week.

The "Tell Me You Love Dunkin' Without Telling Me You Love Dunkin'" collection is based on the #TellMeWithoutTellingMe hashtag that's racked up 1.7 billion views on TikTok. (The idea is pretty straightforward, but if you need an explainer, here's a good one.)

The collection features 11 apparel items including hoodies, pullovers, sleep sets, fuzzy slippers, dog bandanas and more. Most feature Dunkin's signature pink and orange colors in bold patterns that, likely not coincidentally, will really stand out on social media. Several of the items, like the sleep set and wearable blanket, are already sold out.

Overall, the designs are pretty great, with some sporting small details that add to the fun. The color block hoodie, for example, has a donut icon pattern printed on the interior of the hood, while the pajama pants have the same icons down the leg.

But the real draw here is the TikTok-exclusive collection. In a TikTok post teasing it, Dunkin' said it will release the collection once the post hits a million views. Dunkin' hasn't revealed what items the collection will actually include, but the teaser post features a T-shirt and a reversible plush that transforms into either a hot coffee or an iced coffee.

"It's never been easier to tell someone if you're feeling hot or iced," the voiceover says. (The plush was likely inspired by another TikTok trend, the reversible mood octopus.) 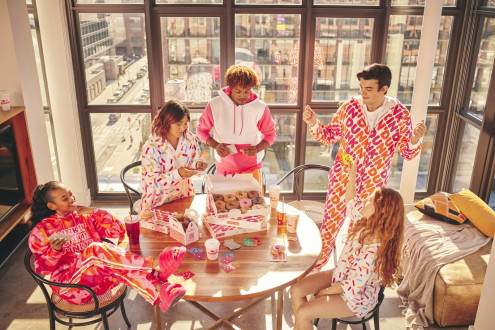 Earlier this year, for example, Dunkin' teamed up with TikTok megastar Charli D'Amelio for a merch line that D'Amelio promoted to her 111.6 million followers. The brand has also issued branded house paints, partnered with Snoop Dogg on an apparel line and created a collection of outrageous fake merch, among other efforts clearly geared at generating buzz on social media and elsewhere on the internet.

Dunkin' continues to use merchandise to drive digital engagement as well as or better than its contemporaries. Even if the brand doesn't reach the million views required to unlock its latest TikTok collection, this campaign is already a win.