E-sports competitions have grown in popularity immensely over recent years. As video game graphics and capabilities grow, reaching wider audiences all over the world due to online play, the activity as a spectator sport has taken off, too, with fans filling world-class venues like Madison Square Garden to watch e-sports competitions.

And, like any professional sport, both virtual and in person, teams need jerseys. But where e-sports is different than traditional sports is that there are really two teams, in a way. There are the players who are sitting in front of their screens controlling the players actually doing the action, whether it's driving cars or shooting at each other. That's the second team.

So, shouldn't those "players" get jerseys, too?

Video game developer Blizzard thinks that the virtual players in the Overwatch league should have the same sense of community as the human players. 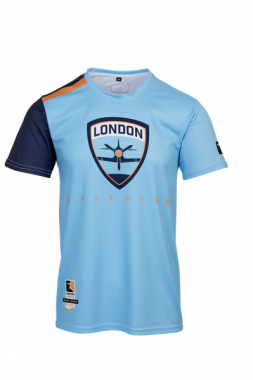 Blizzard's Overwatch league will include jerseys, like this one for the London-based team, for human players as well as their virtual counterparts. | Credit: The Verge

According to The Verge, Blizzard will include digital uniforms for in-game characters, so the spectators can see exactly which team's players are doing what.

And, just like we do for our favorite athletes, fans can purchase jerseys for their favorite teams to deck out their virtual players beginning in 2018.

With big-name owners like Robert Kraft (owner of the New England Patriots) and Jeff Wilpon (chief operating officer of the Mets) starting their own e-sports franchises, it's clear that e-leagues like Blizzard's Overwatch league are on the rise.

If they can keep packing arenas, the use of merchandise (both tactile and virtual) will certainly increase. This could provide an entirely new crop of clients in the sports merchandising side of the industry.