Come tomorrow, Philadelphia figures to make every other city in the country (possibly the world!) green with envy, as millions of longtime fans and their bandwagon brethren will reward the Eagles for their Super Bowl LII triumph by flooding Broad Street and the Benjamin Franklin Parkway as enthralled victory parade attendees. As we approach the historic recognition of the franchise’s inaugural Big Game win following two setbacks, supporters have, according to sales figures, found few activities as compelling as buying items affiliated with their beloved Birds. That allegiance to the club, which, despite a 13-3 regular season mark, entered its three playoff tilts as an underdog, has helped the new minted titleholders to claim another title, that of the biggest peddler of merchandise of any Super Bowl champion. 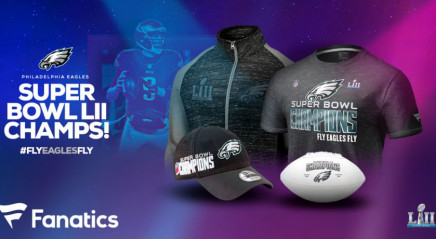 The team’s 41-33 not-sorry-to-have-disturbed-your-dynasty defeat of the New England Patriots made for an unforgettable evening of revelry on Sunday, and the novelty of proclaiming their heroes as the best of the best has led thankful observers to swoop in to purchase items that will convey their pride and gratitude. Having not won a title since its pre-Super Bowl era NFL championship in 1960 (adios to that waiting period!), the Eagles are gladly playing their part in spurring the economy, with local stores benefiting and Fanatics really enjoying a boost, as, per Philly Voice, the upset of the Patriots has resulted in the setting of sales records in retail spaces and online. Fathom that, folks—not even three full days removed from the Minnesota-held game, Birds backers have placed their team behind only the 2016 Chicago Cubs as the biggest movers of commemorative sales ever.

The Eagles will sell more merchandise in total than any other Super Bowl Champion according to Fanatics and this will be Fanatics’ second-best selling championship event only behind the Cubs’ World Series in 2016. Here’s a heat map of sales immediately following the game. pic.twitter.com/oMVWubvOWR

Given that the baseball bunch’s supporters had to wait 108 years between World Series triumphs, one can see how eager they would be to honor the Cubbies, but Philadelphians and those whose feathers become ruffled whenever anyone counts out the birds have not been slouches, with Fanatics, in its role as the NFL’s official merchandiser, succeeding, in part, due to a well-organized social media campaign to celebrate what many are hoping will not be a once-in-a-lifetime occurrence. While the online purveyor and Modell’s and Dick’s sporting goods operations have seen surges in apparel products, the love fest with the Eagles, who already have the second-best odds behind the Patriots (hey, where’s the respect? No matter, people love underdogs anyway) to win Super Bowl LIII, is going to continue far beyond the winter.

Thanks to the National Bobblehead Hall of Fame and Museum, fans will be able to secure more than two dozen keepsakes honoring the Lombardi Trophy-hoisting neophytes. The Milwaukee entity, set for an April opening, is engaged in the limited production of bobbleheads that immortalize 24 roster members, including Super Bowl Most Valuable Player Nick Foles, no stranger to such a promotional product-infused bit of kudos. It will also issue three-foot-tall versions of the backup-turned-dragon slayer; tight end Zach Ertz, who caught the winning score from Foles; and the team’s mascot, Swoop.

“The number of inquiries we began receiving even before the Eagles won the Super Bowl was beyond anything we have ever seen before,” museum co-founder and CEO Phil Sklar said of the eventual windfall that will soon hit his location, which will display the team’s championship bobbleheads come its spring debut.

Regardless of their since-exorcised championship dream demons, the Eagles have long captivated the City of Brotherly Love, and it is truly monumental that fans no longer need to feel that the franchise operates on a wing and a prayer. The promotional products-related acknowledgment has been nothing short of amazing and will continue to be, and the parade will no doubt find onlookers donning their new garb as the gridiron greats remind everyone that every dog indeed has its day. Now, if we could just have this bad boy mass-produced…

Your Big Mac Moment: The Comfort of Safety Versus the Promise of the Unknown