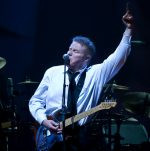 This has proven an eventful spring for The Eagles. In late March, the Rock and Roll Hall of Fame inductees announced they will unite with Fleetwood Mac to headline July’s Classic West and Classic East shows in Los Angeles and New York City, and on May 1, the American icons sued a Mexican hotel for its supposed attempts to establish a connection between the band and the location’s branded merchandise. The items reportedly look to bank on the commonality between the establishment’s name, Hotel California Todos Santos, and one of the group’s five chart-topping songs.

The 11-page lawsuit, filed in the Golden State, contends that the 57-year-old destination is “selling merchandise that bears the HOTEL CALIFORNIA Mark to consumers in the United States, and to U.S. consumers who visit a hotel in Todos Santos, Mexico that caters to U.S. tourists,” noting that doing so leads consumers “to believe that the Todos Santos Hotel is associated with the Eagles and, among other things, served as the inspiration for the lyrics in 'Hotel California,' which is false.” Don Henley, the lead vocalist on the 1977 track that has inspired the controversy, has stated that the tune serves as a metaphor for “the dark underbelly of the American dream. It’s about excess, it’s about narcissism. It’s about the music business. …. It can have a million interpretations.” That declaration came two months after he and his bandmates initiated opposition to the Mexican spot’s November 2015 trademark protection filing for the Hotel California mark.

That move, on an intent-to-use basis, found the site, under the ownership of Debbie and John Stewart, seeking sanctioned use of numerous products, including apparel, footwear, hats and jewelry. A Forbes piece contends that The Eagles, the winners of six Grammy Awards, can sue in the U.S., since the Stewarts supposedly operate the 11-room escape and gift shop through the California-based Hotel California, LLC.

The legal document asserts that the overseers, when making their 2001 purchase, “sought to revitalize the hotel and create a reputation for it, based at least partially on the hotel’s reputed, but false, connection to the Eagles.” The history tab on the website debunks the contention that the rockers once owned the place and notes that the Stewarts have no, nor promote any, affiliation with Henley et al, whose lawsuit stems from the United States Patent and Trademark Office’s April refusal to accept their trademark application for the Hotel California mark in classes such as apparel, guitar picks, playing cards and posters. The office shot down the petition, which the musicians used to argue many classes range from 2005 to 2013, to keep it from conflicting with the initial October opposition.

While the hotel has dispelled ties with The Eagles, it perhaps does itself no favors by stating “many visitors are mesmerized by the ‘coincidences’ between the lyrics of the hit song and the physicality of the hotel and its surroundings,” with five bullet points explaining the supposed similarities. Three weeks into the matter, The Eagles, frequent protectors of their intellectual property, seem prepared to take it to the limit one more time.