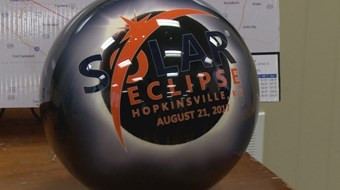 As many as 200,000 visitors will trek to Hopkinsville, which has affectionately dubbed itself "Eclipseville," to take in the total solar eclipse and purchase event-centric goods. (Image via whas11.com)

There are certainly occurrences that each of us wishes would happen more often, but we frequently have to accept that those cherished events might transpire only once in a blue moon or a longer period of time. Other folks have affinities for rarities, and for those select individuals and those among us who are a bit more covetous, August 21 will certainly not go overshadowed when we ponder unforgettable moments. On that day, a total solar eclipse will be totally visible within a band across the contiguous United States, and a small Kentucky town—set to be the epicenter of activity—has dubbed itself “Eclipseville” and is looking to be a beacon for astronomy buffs and promotional products aficionados alike.

As the first total eclipse to travel the width of the U.S. since June 8, 1918, the milestone experience will lure thousands of curious and captivated stargazers to Hopkinsville, a quaint section of the Bluegrass State’s Christian County. All eyes will be on the 33,000-populated stretch because astronomers determined that the moon will achieve maximum coverage of the sun at nearby Orchardale Shepherd Farm. Darkness will consume the country for a hair more than two minutes and 40 seconds, and locals are beaming over not only the scientific impact of the once-in-a-lifetime celestial celebration but also the economic impression that it could leave.

Goodies such as beverages, bowling balls, coasters, ornaments and pieces of art will reflect how monumental it is for “Eclipseville” to entertain the throng, with branded protective eyewear putting the focus not only on shielding one’s eyes when taking in the concealment but also on doing so stylishly. With 12 days left to go before it hosts history, Hopkinsville, famous, among other reasons, for being the birthplace of psychic Edgar Cayce, is a prognosticator’s vision come true in terms of predictions that people are making regarding the financial boon.

“We’re encouraging our residents to really embrace this opportunity,” Mayor Carter Hendricks said of the splendor that could generate $30 million for the region. “We know that it’s going to create a little more hassle over that weekend, but when it’s all said and done, it’s going to be worth it because it’s giving us a chance to showcase … all of the region for a worldwide audience.”

One of his constituents, Kerri Thomas, lamented the massive influx of bodies that will descend upon her relatively unknown expanse, but she confessed the summer circumstance will be an interesting break from monotony, noting “The most exciting thing that happens around here is if somebody gets shot.”

Spirits rather than firearms will end up raised in the town, and the promo items will likely lead end-users to part with money that is burning in their pockets. As long as the only scorching that occurs is the figurative kind, the day should go down in the promotional products industry’s history as an occasion not soon to be eclipsed.