Eli Manning At the Center of Bogus Merchandise Scandal

With all of the steps government agencies and sports leagues take to limit counterfeit merchandise, it's hard to believe that sometimes the practice comes from the inside. What's even harder to believe is that it could come from a big-name athlete with what appeared to be a squeaky clean record. In this case, we're talking about Giants QB Eli Manning. Reports came out today that Manning knowingly passed off memorabilia as "game-used" with help from Giants equipment manager Joe Skiba.

In a civil action suit against the Giants, CEO John Mara and Manning, plaintiff/collector Eric Inselberg claimed that Manning asked Skiba for two helmets "that can pass as game-used," according to Deadspin. 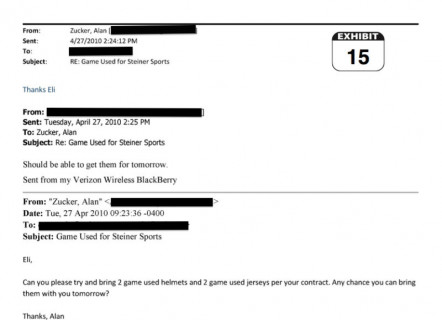 Deadspin also got its hands on an email exchange from 2008, in which Inselberg asked Skiba whether a helmet his friend was offered was "the BS ones Eli asked [Skiba] to make up because he didn't want to give up the real stuff." Skiba confirmed that, yes, they were in fact "BS." 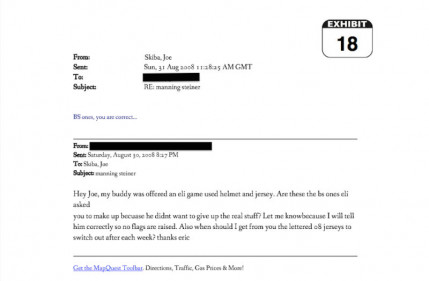 The suit claims that the Giants organization possibly withheld or deleted the messages in question, as they have produced emails from Skiba dating back as far as 2003.

The suit dates back to 2014, after Inselberg, along with co-plaintiffs, were charged by federal law enforcement in Chicago for selling fake game-used jerseys. Michael Jakab, one of the co-plaintiffs, spent $4,300 on a helmet reportedly worn by Manning during the Giant's 2007 Super Bowl season. He later referred to the item as a "$4,000 paperweight," according to the New York Post.

In its defense, however, the Giants released a statement on Twitter, saying that the emails were taken out of context.

The following statement was released on behalf of the NY Giants... pic.twitter.com/BfMHEBcu7V

It would be a large black mark on a family dynasty, if this turned out to be true. The Mannings are basically the Kennedys of the NFL at this point.