People looking at a banner for a what appears to be a new miracle drug called Revival might be disappointed that the advertised drug won't, in fact, help them to "Seize the moment," unless the moment they want to seize is listening to a new Eminem album.

Eagle-eyed hip hop fans might notice that the word "Revival" features a backward E on the bottom, the trademark of Eminem.

The banner was revealed (possibly by accident, possibly "by accident") when Eminem's manager Paul Rosenberg posted a picture of the new album by Yelawolf. The "Revival" banner is visible out the window. 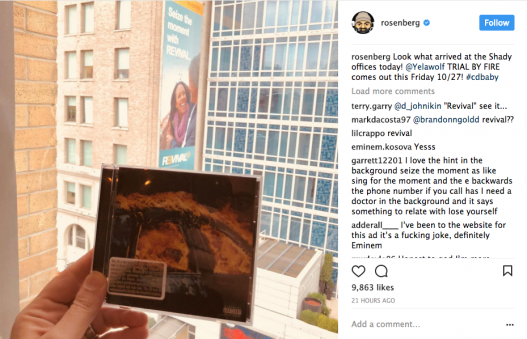 Whoops! That giant banner hinting at a new Eminem album just happens to be in the background! | Credit: Instagram

Thanks to some darn good detective work by internet sleuths, we know this about the banner:

What's more, the group that we can assume is Interscope/Eminem's marketing team went the extra mile by making a website for Revival, throwing in a bunch of Eminem-themed clues.

So, it is a pretty safe bet that this is a marketing plan, and a really sharp one at that. The final question is, was it leaked by accident?

Look, Rosenberg is the CEO of Def Jam Recordings, so he knows a thing or two about marketing. This was not a situation where Rosenberg was like "Oh boy, I can't wait to show off this new CD, I think I'll just randomly hold it up in front of the window, as this area gets the most natural light, which is optimal for Instagram. Oh, shoot! I accidentally included the fake banner that's hanging up teasing a new Eminem album! Darn you, Rosenberg, and your starvation for well-lit Instagram pictures!"

I don't know what Paul Rosenberg sounds like, so this is just an educated guess.

The bottom line here is that this is a really cool way to market something that will no doubt be in high demand. Eminem is notoriously private, and has been mum about new material for a while now, despite his fans rabidly anticipating it.

If we were to guess, we'd say you could see a lot more pharmaceutical-themed promotions on the way, like pill boxes or first-aid kits.

This is some grade-A thinking outside of the box, and we've seen a lot of that recently from other artists.