Being a bit of an Anglophile, I have come to include simply saying the names of certain English boroughs, cities and districts among my means to appreciate the overall dignity and identity of the across-the-pond population. Due to my allegiance to music and literature, Liverpool (The Beatles), Manchester (Oasis) and Stratford-upon-Avon (William Shakespeare) stand out, but, for no real reason that I can pinpoint other than having caught some soccer coverage years ago, Sheffield has also pleased my ears. The recent spelling of the city and borough situated in South Yorkshire, however, did not delight fans of the Sheffield United Football Club, as a 2018 promotional calendar dropped an “f” from the unit's name on the back cover.

The English have a longstanding reputation as polished language practitioners and overseers (“snobs” is another noun we might hear!), but nobody can escape an occasional gaffe. This goof’s severity, however, is one that we could, if choosing to make a soccer/football connection, compare with that of a botched penalty kick with a title on the line. Misspelling the name of a player might merit a few head-scratches, but bungling the very appellation of the proud city/borough that has cheered for the squad since its 1889 inception is likely leading to a few facepalm reactions. 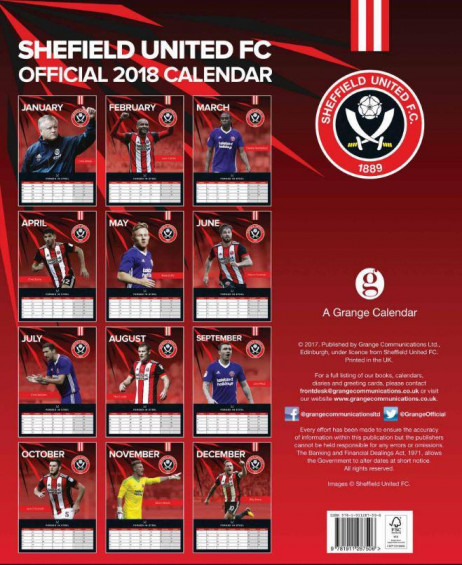 Sheffield United has not gotten a kick out of its calendar's misspelling. (Image via calendarclub.co.uk)

Given the success that the Blades have attained over their history, including last year’s first-place League One finish, they certainly would have been hoping that the calendar honoring their promotion to the English Football League Championship division would prove flawless. Instead, the promotional product has generated embarrassment, particularly because publisher Grange Communications Ltd. stated not far from the mistake that “Every effort has been made to ensure the accuracy of information within this publication…” The oversight led to social media ribbing, with a fan of Sheffield Wednesday, another Championship constituent, tweeting “Wen yor offishul calendar isn’t pruferead.” The erroneous item lives on at calendarclub.co.uk, making one wonder of “Sheffield” might one day join these words as common mistake makers.

Americans have some issues with spelling, too, that we cannot deny, but at least this snafu shows that the land whose people share the adjectival description that we apply to the naming of our language can still “f” up from time to time, too.