How to Enroll as a University Distributor

More than 20 million people enrolled at colleges and universities this year, according to the National Center for Education Statistics. If that’s not enough of an incentive to find postsecondary education clients, Statisa estimated that the number will rise by about 3 million over the next decade. And even more, there are endless opportunities at each college or university with school merchandise, as well as additional promotional needs from athletics, student organizations, academic departments and more.

So what’s big on campus right now? Regardless of the use, apparel remains supreme, Janelle Hizer, operations and trademark coordinator for the Office of Public Affairs at Washington University in St. Louis, said. “I would say apparel is still really big—whether it’s the T-shirts, jackets [or] activewear that are being sold in the bookstores,” she said. “Also, departments and admissions—they’re always looking to buy T-shirts to give away to student groups. Obviously, [departments] want T-shirts with their names on [them].”

And with college students’ reliance on technology, products that pair with electronics are in demand as well. “Our department purchased [the kickstand phone wallet] so we could give it away at our trademark licensing fair,” she said. “We recently have rebranded our website and changed the URL, so we used [the wallet] as a way to communicate that with our buyers across the campus.”

Drinkware also has been a sought-after product, especially since the university implemented a bottled water ban that forbade its campus eateries and vending machines from selling bottled water in 2009. 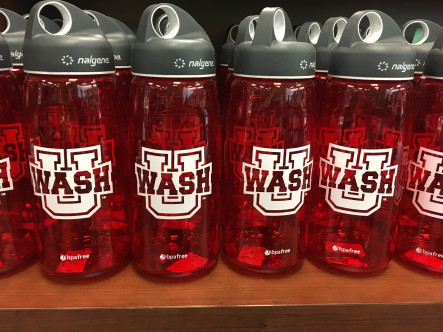 The school has encouraged students, faculty and others to drink tap water from reusable drinkware, making branded water bottles and other drinkware items great options for new employee gifts or student giveaways, Sheila Ricken, an account executive at HALO Branded Solutions, operating out of Maryland Heights, Mo., and licensed distributor for Washington University in St. Louis, said. “[Its] students come from all over the world as most universities do today, but [its] student population is very international,” she said. “And so a free piece of drinkware is a great little giveaway because these students come with what they bring in a suitcase and most of them are not thinking to bring a water bottle.”

Aside from knowing what the education clients want, distributors must become licensed with the university in order to sell promotional products to the school. “We work with Learfield Licensing [Partners], and in order to use our marks or our name or images, [distributors] need to become licensed, which is going through Learfield’s process and also becoming an affiliate with the Fair Labor Association,” Hizer said.

There’s a small fee and application process, but once accepted, the university will place new licensed companies on its website so department buyers can easily find them. “Some schools only allow so many promotional products [distributors] to become licensed or handle certain things, but right now we have an open door where if you want to become licensed and you meet the criteria, then you can go down that road,” she said.

After becoming a licensed vendor, there’s a lot to learn. In Washington University in St. Louis’ case, there are nine official logos, including variations of the main shield in addition to a wire frame shield, official seal, Brookings seal, “WUSTL” monogram and typeset of “WASHU.” There also are nine additional athletic marks depicting the Bears mascot, including three kid-friendly versions, and logos for each department and school. And to further complicate things, many of the logos also have different rules. “A lot of people like to try to use that [main] shield by itself, which is not allowed,” Hizen said. “But we recently have revamped our guidelines, and that’s still the case with the logos, but we also have an outline shield that people can now use by itself. … That’s a pretty new development, so we’re working with our [distributors] on learning how to use that correctly, but our main [policy] is use our logos as is. Don’t change them.”

On top of everything else, the university also recently made some changes to its logos. So, sometimes the buyers aren’t aware of new rules pertaining to the designs, so it is the distributor’s responsibility to make sure everything is in line with the policy. “I’ve had people [tell] me, ‘Well, we want it to be a forest green item,’ Ricken said. “… And I’m like, ‘Well, it’s really not one of the main colors anymore. It’s more of the bright red.’ [And they’ll respond,] ‘Oh, we didn’t realize that. OK, well then, I guess we want the bright red.’”

Ensuring policy compliance in the beginning of the process also saves the distributor all kinds of trouble that would result if the distributor or university realized the logo is completely wrong at the proofing stage. “I don’t want to have to go back and change the color and change the logo,” Ricken said. “Oftentimes, much like most of our customers, we don’t always have the luxury of tons of extra time in the process. So [we] really need to have to be able to help them focus and figure out the right thing up front, so when we get to the proof process, we don’t run into a lot problems to make changes and slow the project down.”

Succeeding at a university

There are some challenges to working at a school like Washington University in St. Louis. While Hizer is the point person for trademarks and licensing queries, she’s not the contact for all the university’s purchasing. Each department is responsible for purchasing its branded products. How Ricken has gained business in the past has varied by department. “Some of the departments I’ve worked with for many years, and I kind of know what their projects are on a yearly basis, and I generate the ideas for them more often than not before they ask for them,” she said. “Other departments will contact me because I’m licensed, [and they] need a pen and want my advice.”

For those who don’t have established contacts at the university—that’s where the trademark licensing fair comes into play. Hizer recommended distributors participate in the annual event, which allows department buyers and distributors—or “licensed suppliers” as the university calls them­—to meet. “We always invite people that have attended in the past and we tell them to invite people who they know might purchase products,” she said. “And they can come in and make those connections one on one, and hand them their business card and share some ideas with them.”

Once the distributor has developed the relationship, the usual customer service qualities are vital to the education market, with an emphasis on quick turnarounds. “Listening to the client and understanding what it is they want versus what they need—customer service is huge,” Hizer said. “Dependability—probably like most other places, it’s always a rush, so if you’re able to turn it around quickly and also offer quality, especially when it comes to embroidery—because our logo is really tough, … that’s also really important.”

Due to that detailed logo, Ricken thinks ahead when offering product ideas. For example, a pen typically has a small imprint area that might not be able to accurately portray the detailed university shield, so she knows which suppliers offer larger imprint areas, and starts with their products. “There’s plenty of other places where I can get a pen [and] that has great pens, but their imprint areas aren’t very big, so I know if I recommend those pens, that I am creating a problem for myself,” Ricken said. “So, if I can recommend a pen that I know is going to have a really nice [sized] imprint area, then I’m going to have the luxury of a little bit easier process of getting it produced properly.”