In Its War Against Apple, Epic Games Wants Fortnite Fans to Create and Sell Their Own #FreeFortnite Merch

If you're not a teenager, you might not be aware that Epic Games, makers of the immensely popular video game Fortnite, is locked in an, um, epic battle with Apple, but here's the short of it: In mid-August, Epic launched a new feature that allowed Fortnite players to make in-app purchases directly from Epic, rather than through Apple's App Store. Apple responded by removing Fortnite from the App Store and, later, suspending Epic's access to iOS developer tools. Epic filed a lawsuit over anti-competitive practices and sought a restraining order against Apple, which a judge granted on August 24. It's a whole thing.

Anyway, the important part, for our purposes, is that Epic has been waging an all-fronts war on Apple, holding in-game events blasting the tech company and making sure Fortnite players know who the true villain is. And, because it's 2020, that war has now inevitably extended into branded merchandise.

Last week, Epic released a free downloadable "asset pack" that Fortnite fans can use to create and sell their own #FreeFortnite merchandise. The graphic kit includes PNG logos in various sizes and a mockup of the logos on a hat and T-shirt with Pantone colors for print. The graphic is a silhouette of Fortnite's llama logo in the style of Apple's iconic logo: 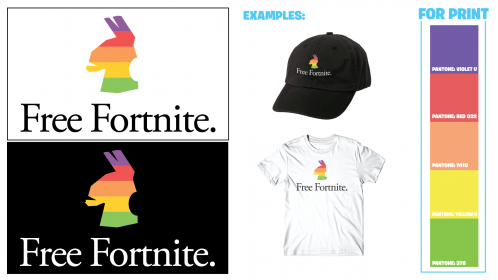 "As we continue our fight with Apple, we’ve released a new asset pack," Epic said in a press release. "You are authorized to produce and sell your own #FreeFortnite shirts, hats, stickers and more. Print your gear and make your voice heard using the #FreeFortnite hashtag."

Epic provided no further instructions and didn't indicate any kind of distribution plan of its own. The developer, it seems, is simply deputizing Fortnite fans to join the war on Apple through branded merchandise. A quick search reveals that "Free Fortnite" designs are already up for sale on Merchoid and Redbubble, with the former including a message that "this product is selling fast."

It looks like Epic also sent physical #FreeFortnite merch kits to top players, seeding a viral campaign. This repost about the merch from the official Fortnite Twitter account, for example, has nearly 500 retweets and 10,000 likes:

Back in 2018, Fortnite players were spending $300 million a month on in-game merchandise, and Epic Games has since ramped up real-life merchandise with licensed apparel, action figures and a whole bunch more hitting major retailers like Target and Walmart.

In other words, Fortnite fans know their branded merchandise. So it's a savvy move by Epic to crowdsource a support campaign centered on it—one of the most effective channels out there—and engineered to go viral. We'll soon see how many fans take up the call to arms to defend their game's honor as Epic's battle against Apple rages on.