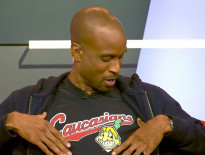 (Image via The Score)

On Monday, we reported that the Cleveland Indians are downgrading its use of the controversial Chief Wahoo logo in favor of what the team deems a more appropriate block "C" logo. The logo still will be used for some merchandise, but, for some, that change is not enough.

ESPN's Bomani Jones wore a T-shirt that said, "Caucasians," in the Indians' script with a white-faced Chief Wahoo on ESPN's "Mike & Mike" to show his opinion of the team's historical use of the logo.

According to CBS New York, ESPN executives told Jones to cover up the shirt during the show.

"As the show progressed, we felt Bomani had made his point and had openly discussed why he was wearing the shirt, and we wanted him to keep the focus to the topics of the day," ESPN said in a statement, according to CBS New York.

Jones zipped up his sweatshirt, but not all of the way, and the logo was still visible.

Perfectly done by @bomani_jones, both in logic and tone. https://t.co/6F1TGPHvyQ

ESPN's Molly Qerim also brought up other Native American-themed logos, such as the Washington Redskins' logo, and Jones cited other logos that he sees as problematic, such as the Atlanta Braves' use of a tomahawk.

Jones further explained that he thinks the T-shirt is funny, and how it features a relatively small change from the original logo. He especially likes the addition of a dollar sign on the character's headdress.

"The reason [the Indians] won't get rid of the Chief Wahoo, which is completely indefensible, is because they can still sell stuff with it," Jones said on the air. "They can say they can de-emphasize it, but they're just not going to set money on fire."

Other shirts drawing attention to potentially racially insensitive logos exist on the Internet, such as this T-shirt mocking the Washington Redskins logo. 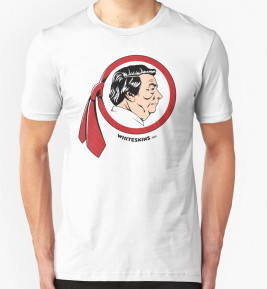