Could We Eventually Print Wearable Tech Items with Inkjet Printers? 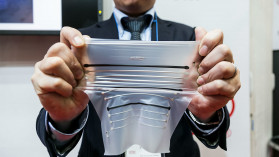 Researchers believe that flexible technology could be made with inkjet Printers. (Image via Science)

We've witnessed the wearable tech boom firsthand. With smartwatches, fitness trackers and other wearable items, the wearable tech market is growing at a fast rate. And, since technological advancements also develop at a rapid pace, it's no surprise to see new features and elements in the wearable sphere. After printing working transistors, researchers believe that manufacturers will be able to make smartwatches with inkjet printers.

Science magazine reported that the researchers at Pohang University of Science and Technology in South Korea created the circuits out of carbon-based compounds.

"I cannot think of another [device with two layers] where everything was done with inkjet printing," Ananth Dodabalapur, an electrical engineer at the University of Texas at Austin, told Science. "This is a good demonstration."

This new development opens the door for flexible electronics, as opposed to stiff items made with silicon chips. These flexible watches could detect data, such as stiffness of arteries and brain activity, to warn users of medical issues, like heart attacks or seizures.

And, unlike many organic electronics, the printed transistors continued to work eight months after creation.

But, don't get too excited just yet. The team packed five transistors into a square millimeter, but circuit chips in computers have millions in a similar space.

"Our technology, in terms of transistor density, is at the stage of silicon technology in the late 1960s or early 1970s, when the first microprocessors came out."

Still, it's an exciting development and a look into a possible future for wearable tech items.