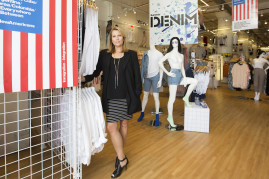 Last month, American Apparel CEO Paula Schneider announced her plans to step down from her position, as rumors of a potential sale began to spin. American Apparel didn't give much reason for her departure, and we didn't really hear from Schneider, herself. Until now.

According to Fortune, Schneider is now CEO of DG Premium Brands. With news of her new job, Schneider also gave some insight into her decision to leave American Apparel.

"It was a T-shirt company, and I had death threats," she told Fortune. "I don't have a bodyguard [at DG Premium Brands], so it's already better."

In addition to the death threats, Fortune reported that a piñata crafted to her likeness was beaten in American Apparel's parking lot. Schneider also said that from the beginning, numerous employees and former employees sought to undermine her.

At her new job, Schneider will preside over the company's brands, including 7 For All Mankind, Splendid and Ella Moss.

No word yet on whether or not American Apparel will be sold, but we do know the company named an acquisitions expert as its new CEO.