Exclusive: Q&A with David Woods on Retirement from AIA Corporation 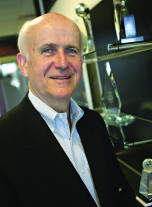 Yesterday, AIA Corporation announced that its president and CEO, David Woods, planned to retire. We spoke with Woods about his time at the helm at AIA Corporation, how he's adapted to changes over the last two decades, what he sees in the industry's future, and his plans for retirement.

What would you say was your biggest accomplishment during your time as CEO of AIA?

When I joined AIA, it had grown quickly without controls, and was not operationally strong. After the move [from Massachusetts] to Wisconsin, we reduced the number of distributors we served to build a solid foundation and started to grow again but in a well-organized way. I am proud of the team we've built and the culture we've created. Since the recession in 2005, we've nearly doubled our sales from approximately $90 million to over $170 million. It's a team effort, and we have a lot of great employees and distributors affiliated with AIA. During the 14 years I've been CEO of AIA, we've had three different ownership groups, and have operated from three different locations in two different states. I would say it's been a great group of affiliated distributors, employees, and a friendly and supportive culture that's allowed us to succeed.

What was one of the biggest challenges you had to face? How did you overcome it?

One of the biggest challenges [as CEO] occurred in the first few months when we decided to move the entire company from [Quincy, Mass.] to Wisconsin during the week between Christmas and New Year's 2003. This required hiring and training completely new staff simultaneously in Wisconsin, and we continued doing business as usual in Quincy. It took a great deal of planning and good weather to make this happen. I kept thinking, "If we have a blizzard, we'll be out of business." Fortunately, the move was successful, and we were able to build a strong company on a new foundation almost from scratch.

That is moving from two notoriously snowy areas during an especially cold time of year.

Well, right across upstate New York in a week that's prone to blizzards! We put the whole company on three trailer trucks, and I watched them roll away, wondering if they'd ever arrive! [laughs]

So, why did the company move from Massachusetts to Wisconsin?

We were a sister company of 4imprint, [Oshkosh, Wis.] at that time. We were called Adventures in Advertising. We were both owned by the same English parent. And they were in Wisconsin, and there was a lot of expense to be saved by sharing that overhead. So we moved into their building, we used their HR services, we used their IT, and then it created a lot of savings for us.

How is the promotional products industry different than it was when you first started? How did you adapt along the way?

I joined the industry in 1991, so the biggest change without question has been the widespread availability of the internet. ...The internet has affected almost everything, generally in a positive way. Twenty-five years ago, many products were still made in the U.S., and, today, many of these are manufactured offshore. Overall, this move has generally been successful, and the industry has adapted to it. Another major change is that many people, like me, are reaching retirement age quickly, so many opportunities exist for acquisitions and further consolidation. I've tried to adapt by [obtaining] continuous education and hiring the best young people we can find for AIA.

Where do you see the industry going in the future? Do you have any predictions for the next 25 years?

This is a tough one. I always say if I could predict the future, I wouldn't have to sell promotional products. Clearly, the industry will continue to grow and change. One of the most significant drivers will continue to be technology, as it has been for the last 25 years. Consolidation will also continue as it becomes more costly to compete. On the distributor side, it will become difficult to continue as an independent, as it will be difficult to fund the investments in technology and staff required. This creates wonderful opportunities for AIA. I see a strong, vibrant promotional products industry in 25 years, one that will be recognizable with perhaps fewer, but even stronger, participants.

During your time at AIA, the company made some big changes, such as its relocation to Wisconsin and acquisitions over the years. How did these changes benefit the company in the long run?

As we know, change is inevitable. So we expect it and accept it. One secret of AIA's success has been our ability to be flexible over the years and to adapt to change as it arises. When we moved the entire company from Massachusetts to Wisconsin, I was concerned with the size and magnitude of the change. As it turned out, it gave us the opportunity to recreate the company from scratch, building a stronger and better company than we otherwise might have been.

What would you say to other CEOs handling big decisions like these for their own companies?

My experience would say gather and analyze the facts, get buy-in from your key stakeholders, and then move ahead quickly.

What are your plans for retirement?

Yeah! As a matter of fact, I'm looking forward to it, and I've put it off for a long time. I plan to stay in Wisconsin for now, and spend my first year traveling, and visiting friends and family. I have six wonderful grandchildren that I want to spend a lot of time with. I'm also active in two nonprofits, and I want to continue that work. I'm very confident good things will happen.